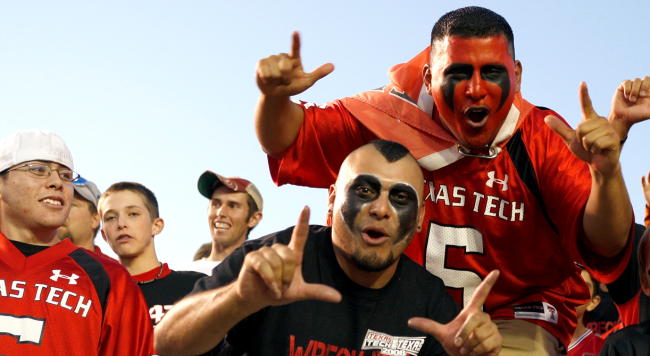 After tens of thousands of votes, Fox has officially crowned Texas Tech Red Raiders fans the best fanbase in all of college football.

Beginning on August 1, Fox College Football Twitter put 64 college football teams into a bracket, seeded by the number of Twitter followers each program had.

Along the way there were more than a few upsets.

That last upset was apparently a sign of things to come.

In the Sweet 16, Cincinnati continued on with yet another upset, this time over Virginia Tech. Iowa State scored another upset in defeating Ohio State. Houston kept going by beating higher seeded Utah. West Virginia upset Michigan State, and Texas Tech moved on over 2nd seeded LSU.

The Elite 8 saw just one upset with Texas Tech moving on past Oklahoma State, leaving the Final Four with the Red Raiders vs. Iowa State and West Virginia vs. Oklahoma.

When all was said and done, Texas Tech received 51.7% of the vote over Oklahoma in the Championship.

Does Texas Tech really have the Best Fanbase In College Football?

THE BEST FANBASE IN COLLEGE FOOTBALL 👑🏆

After more than 82,000 votes, @TexasTechFB wins our College Football Fan Vote by just 3.4% of the vote 😱

Texas Tech fans are pretty rabid. As Matthew Conner of Wreck ‘Em Red, explained following the win, “Earlier this summer, Tech fans took over Twitter by posting thousands of cactus emojis in response to a TCU football assistant coach derogatorily referring to Lubbock as being in the desert on Twitter. Tech fans even had a batch of cacti delivered to the TCU football offices in response to the remarks.”

Naturally, not everyone agreed with the outcome of the vote.

Not really best fanbase, more of a least hated team

Many fans, especially those in Oklahoma, thought Texas Tech only won because so many fans voted against the Sooners.

I would like to believe that was all Tech fans… but it wasn’t.

Fans of other big schools who got upset earlier in the bracket also felt that way.

College football fans may not agree (what else is new?), but Red Raiders fans will always be able to call “scoreboard” “billboard” in any argument this year.