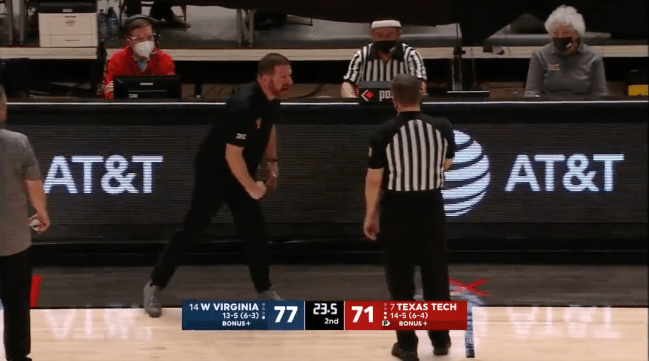 Texas Tech head coach Chris Beard lost his mind and was ejected in the final minute of the No. 7 Red Raiders’ loss to No. 14 West Virginia on Tuesday. Amidst the official-directed tirade, Beard sat on the floor and mimicked a timeout gesture while screaming furiously about how the game was called.

After receiving two technical fouls and being tossed from the contest, the 47-year-old made sure to get his money’s worth. He continued to vocalize his frustration and addressed each referee on the floor. Prior to his exit, Beard took a moment to pause, mid-rant, and walked over to West Virginia coach Bob Huggins to give him a fist bump.

Texas Tech head coach Chris Beard was ejected from the game after arguing with the referees. pic.twitter.com/o776Ypr4ji

Texas Tech had its three-game winning streak snapped by the visitors and free throws were the difference. West Virginia’s Sean McNeil made three of the four technical free throws after Beard was sent off and Miles McBridge followed it up by making both of his regular free throws to put the game out of reach.

The Red Raiders were called for 29 fouls in the game, while the Mountaineers received only 20. It was particularly important in the second half, as WVU shot 27 free throws to Texas Tech’s 10. The final score finished 82-71, so if both teams had shot an equal amount from the charity stripe, the home team would have won— or at least had a better chance of winning.

Beard’s tirade was a culmination of the exponentially growing anger toward the officiating, but it appeared to stem from a ticky-tacky fourth four on Mac McClung, the team’s star offensive player. He picked up his fifth and fouled out shortly after, which shifted the momentum of the game and took a crucial component to Texas Tech’s offense out of the game.

Huggins and the Mountaineers’ win was their first in Lubbock since Beard took over in 2016, and it gave them a season sweep over the top-ten ranked Red Raiders.