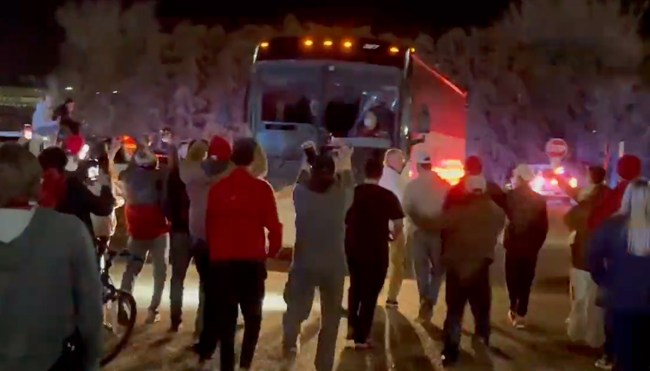 In 2016, Texas Tech hired Chris Beard to replace Tubby Smith as the head coach of the Red Raiders men’s basketball team, and it’s safe to say that decision worked out pretty well.

Beard helped Texas Tech rack up a number of marquee wins, secured the first Big 12 conference title in the history of the program, and led them to a couple of deep NCAA Tournament runs—including the 2019 campaign that ended with the team losing to Virginia in the national championship game.

The turnaround Texas Tech experience under Beard’s watch naturally resulted in the coach catching the eye of some more prestigious programs, and last year, he decided to guarantee he’ll be a marked man in Lubbock for the rest of his life when he defected to Austin to take the helm for the Texas Longhorns.

Texas Tech has fared pretty well under Mark Adams, as the Red Raiders are currently ranked #14 in the country while the Longhorns cling to the 23rd spot. However, fans of the school Beard abandoned have not forgotten about his treachery.

Over the weekend, a number of Texas Tech students started camping out outside of the team’s arena in the hopes of being the first people in the building for what promises to be a heated showdown between the two schools on Tuesday night.

Students are getting their camping gear out to be the first in line for the Texas Tech v. Texas game on Feb. 1 at the United Supermarkets Arena 📸 @jkath_DT pic.twitter.com/mTuRM6wPRP

The scene Monday afternoon outside United Supermarkets Arena, where Texas Tech students are camping out for Tuesday’s game against Texas. Some have been there since Saturday night. pic.twitter.com/bYW4fZiwzr

Beard and his squad should expect to be greeted by a very hostile environment when they make their way out onto the court in United Supermarkets Arena, and on Monday, some Texas Tech fans gave them a preview of what they can expect when they tracked down the bus that ferried the Longhorns to Lubbock.

In case you weren’t sure how these Texas Tech students feel about Chris Beard.

Yep, that’s him in the front seat of the bus. pic.twitter.com/QOJuzV6EPB

A couple of angles on the “gathering” outside the arena. This is the top of the ramp outside the tunnel where the Texas bus was parked. The bus was parked on the side when the team went inside to practice, then the students followed the bus around to the ramp to block the exit. pic.twitter.com/1Et2QVoNHN