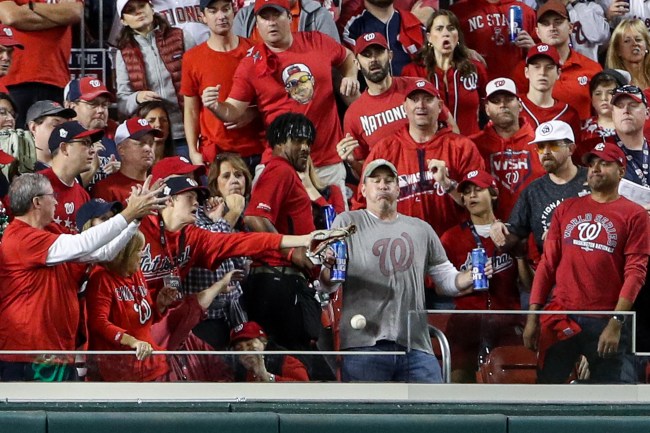 For the rest of his life, Jeff Adams should be permitted to press a button on the arm of his loveseat and have a keg of ice cold Bud Light delivered to his door.

That is the very least the beer company can do for what the Nationals fan did during Game 5 of the World Series on Sunday.

Adams was double-fisting BL’s when Astros’ Yordan Alvarez hit a dinger just beyond the left-field wall that was scorching in his direction. Instead of dropping the beers and attempting to catch the valuable souvenir, Adams used his chest to deflect the ball, beers intact.

This man is a hero. Twitter please figure out who this guy is so we can reward him. #WorldSeries pic.twitter.com/suMtVECfXY

Apex Marketing estimates that the exposure brought in a media value of $7.2 million for Bud Light.

So, as a gesture of gratitude, the beer company is sending Adams to Houston to watch his Nationals fight to stay alive in Game 6 of the World Series.

…so as long as he wears this shirt for the #brand.

Update: We are in contact with our hero. He’s wearing this beauty to Game 6. pic.twitter.com/CobFG9q8kC

JUST IN: @budlight is sending “beers over baseball” guy, Nationals fan Jeff Adams, to tomorrow night’s Game 6 in Houston. They’ve also made him a shirt. Media value to Bud Light, according to @ApexMarketing, was $7.2 million. pic.twitter.com/fvP2bz2PoH

Yeah, a trip to the World Series is great and all, but if I were Adams, I would try to get my paws on some of those marketing dollars he generated. I’d start at $50,000. I think that’s a fair commission for bringing in $7.2 million in business.