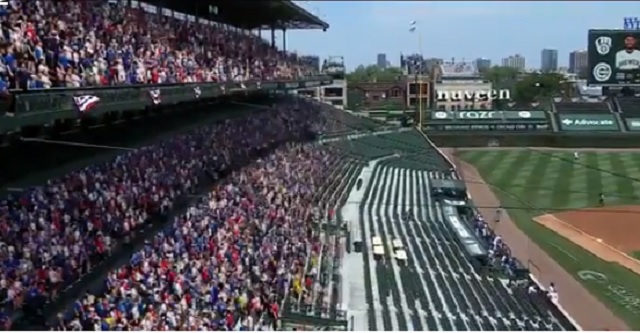 Fox Sports is experimenting with trying to make their broadcast a bit more “normal” considering the strange times we live in. During Saturday’s Brewers-Cubs game the network filled the empty stadium with digitally rendered fans for its broadcast.

“The execution of it is very similar to the (yellow) first-and-10 line in football,” Brad Zager, FOX Sports’ executive producer and head of the production, told Sporting News. “The same way you see the sponsorship behind home plate on a national broadcast on that green screen, we’ve kind of (taken) bits and pieces of all the ways we’ve enhanced broadcasts and brought them together to try to get it to work for a virtual crowd.”

“We feel like the crowd — the audio the crowd provides — is a big part of watching a sporting event on television,” Zager said. “We wanted to figure out how to do that with all of the technology that was out there.”

Here’s what the virtual fans looked like during the broadcast on Saturday.

Here's a look at the virtual fans at Wrigley Field for the Cubs-Brewers game on Fox. pic.twitter.com/rmA5lENFRH

The reactions to the virtual fans was mixed on Twitter.

This is so weird … definitely prefer the cutouts! https://t.co/wx5v0ZvWIg

My take: I love the virtual fans that FOX has here during the Cubs/Brewers game. Sure, it's freaky, or weird, but it makes a game feel more normal. I'm all for it. https://t.co/IE3QNZOs7O

I hate this so much lol just leave the stadium empty https://t.co/k86rNshSjO

Okay so the virtual fans that they can just overlay on the empty stands are pretty cool, as you can see in this transitional image from the MLB! #sports #baseball #mlb pic.twitter.com/uaYDLMFXIM

Please don't ever do the virtual fans again Fox

Virtual fans in the stands is creeping me out. Stop it #mlb