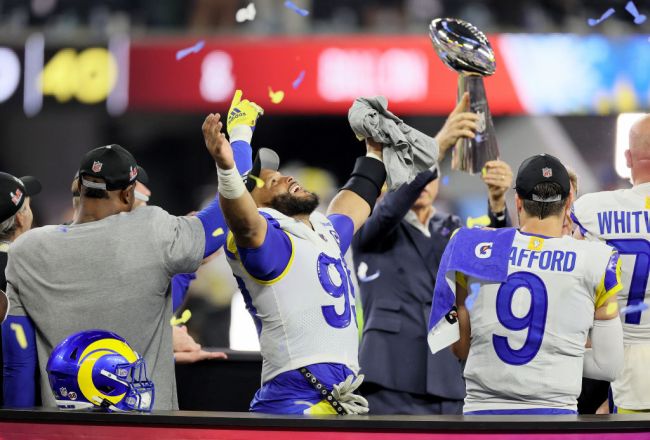 When the Los Angeles Rams won the Super Bowl, all of the storylines after the game weren’t as happy as one would have expected. Despite their impressive run to winning a ring, there were rumors that they could lose a key offensive lineman, one of their defensive stars, and their head coach all to retirement.

While Andrew Whitworth has seemingly played his last game, leaving the Rams to fill a hole on their O-line, Sean McVay has since signed a contract extension to continue coaching the team and Aaron Donald seemed committed to chasing another ring with the Rams.

Unfortunately for Rams fans, Donald’s plans to return may not be as set in stone as expected. In a recent article for ESPN, Jeremy Fowler reported that Donald is looking to get a raise and if he doesn’t get the money he wants, he could join Whitworth in retirement.

According to Jeremy Fowler, Aaron Donald has a number he'll play for in these contract talks. If the Rams don't meet it, "retirement can still go down." https://t.co/Zfp8yjhhXf

Keep in mind that the retirement buzz around Donald — first delivered by NBC’s Rodney Harrison on the Super Bowl pregame broadcast — was always real. And it’s my understanding that Donald has a number he will play for. If it’s not met, retirement can still go down. Adding years to an already existing three-year pact takes Donald well into his mid-30s, and who knows whether he wants to play that long? But that’s the best way for Los Angeles to stretch out the money for cap purposes.

The Rams are currently one of the favorites to win the Super Bowl next season, but losing Donald would be a huge blow. Donald and the Rams pass rush were a key part of the team’s Super Bowl victory back in February. They’ll need to do whatever they can to convince to come back for another run if they are going to win a second consecutive Super Bowl.