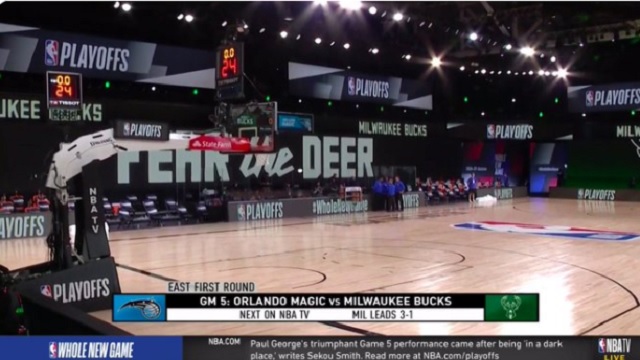 The Milwaukee Bucks have officially boycotted their playoff game against the Orlando Magic on Wednesday afternoon in response to 29-year-old black man Jacob Blake being shot seven times in the back by Kenosha, Wisconsin police officers.

The Bucks players made this decision in the wake of the Jacob Blake shooting in Wisconsin, ultimately deciding that they wouldn't leave the locker room for the start of Game 5 against Orlando. https://t.co/COJ6E0aJLj

Bucks guard George Hill says to @TheUndefeated his team is not playing against Orlando tonight in light of shooting of Jacob Blake in Kenosha, Wisc. “We’re tired of the killings and the injustice,” Hill to @TheUndefeated.

Before boycotting the game, several Bucks players including George Hill had been vocal in recent days following the shooting of Jacob Blake.

“We can’t do anything [from Orlando],” Hill said Monday. “First of all, we shouldn’t have even came to this damn place, to be honest. I think coming here just took all the focal points off what the issues are.”

“It’s just sickening. It’s heartless. It’s a f—ed up situation,” Hill said. “Like I said, you’re supposed to look at the police to protect and serve. Now, it’s looked at harass or shoot.

“To almost take a guy’s life, thank God he’s still alive. I know the cops are probably upset he’s still alive, because I know they surely tried to kill him. But to almost take a man’s life, especially in front of one’s kids, that wasn’t resisting in his back at point-blank range, is a heartless and gutless situation. We need some justice for that.”

Update: The Houston Rockets and the Oklahoma City Thunder have also decided to boycott their game.