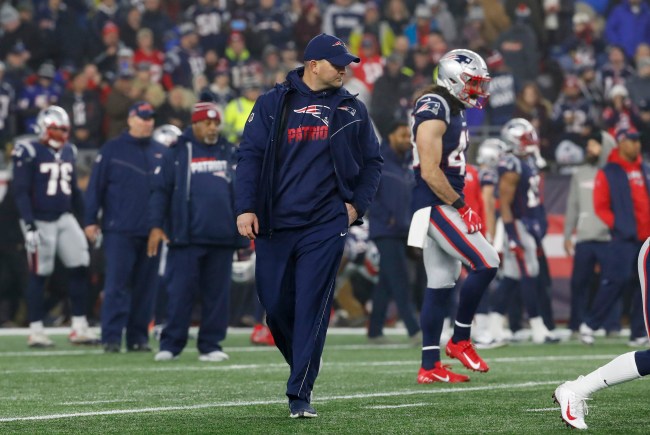 The NY Giants have their man and he’s coming from the Bill Belichick coaching tree.

According to ESPN’s Adam Schefter, the Giants hired Pats wide receivers coach Joe Judge to become their next head coach.

New York Giants are finalizing a deal to make Patriots’ wide receivers coach Joe Judge their next head coach, league sources tell ESPN. Deal was in the works as of last night, which is another reason Matt Rhule took the Panthers’ HC job.

Apparently, Matt Rhule was interested in the Giants job but got a longer deal with the Panthers. Rhule offered the Giants to match the Panthers six-year deal but they declined.

Panthers are giving former Baylor HC Matt Rhule a seven-year – seven year – deal worth $60 million that with incentives could be worth up to $70 million, per league sources.

One note on the #Giants: Matt Rhule called them before signing his 6-year deal with the #Panthers and gave them the opportunity to match and lure him to get on the plane. They declined and hired Joe Judge instead.

Giants fans weren’t sure what to make of the hire considering Patriots receivers weren’t killing it under Judge last season.

Joe Judge is a 37-year old who's been their special teams coach up to this year when he added the role of wide receivers coach as well.

The Patriots WR group this season was among the worst in the league if not the very worst. https://t.co/ItbKpZDEHS

We waited all this damn time for JOE JUDGE pic.twitter.com/0IBGkJeqId

Prior to being hired by the Panthers, Rhule was the head coach of the Baylor University Bears and the Temple University Owls.

As for Joe Judge, who is just 38-years-old, he was with the New England Patriots since 2012 before joining the Giants.

Judge’s football coaching career began in 2005 as a graduate assistant at Mississippi State. He then moved on to being the linebackers coach at Birmingham–Southern College before being hired as a special teams assistant for the University of Alabama football team.

Judge was hired by the Patriots as a special teams assistant in 2012 and served in that role until 2014, which is when he was promoted to Special Teams Coordinator. Then, this past season, Judge served as the team’s wide receivers coach.