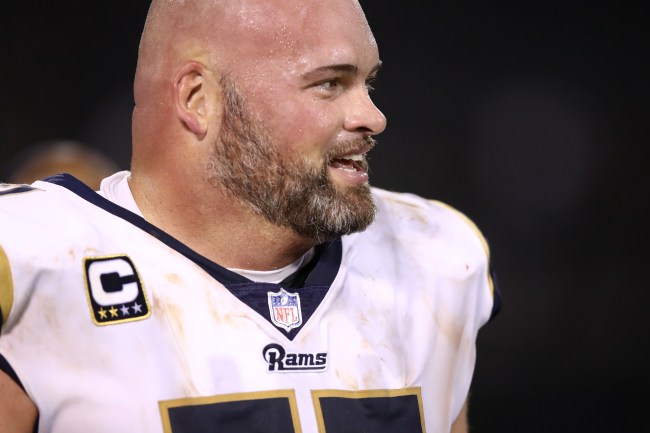 After the disgusting and sad news about the shootings the other night at a bar in Thousand Oaks that left 12 dead and others wounded, there are a lot of people trying to do their part to show support for the victims and their families. It won’t erase the pain of the random act of violence, but it is a gesture that helps bring people together — and Los Angeles Rams offensive lineman Andrew Whitworth is one person who is going above and beyond the call of duty.

That’s because, according to a recent piece published in The Athletic, via Yahoo! Sports, Whitworth isn’t just offering up thoughts and prayers for the victims and their families from the Thousand Oaks shootings, but he’s actually donating his entire Week 11 paycheck to the families, which comes out to about $60,000. Talk about an awesome bro move, right?

Following the shooting in Thousand Oaks, which is near the Rams practice facility, Andrew Whitworth told The Athletic that he was one of the players in the locker room who addressed the team, telling his teammates how important it is to help come together for the community in a time like this. Not only did Whitworth tweet out his feelings after hearing about the attack, but he wanted to go a step further by giving money, too.

Heart broken this morning! I’m just sorry to those affected. I don’t have words that I feel can help. But I promise to find a way to help support our community through this tragedy!
🙏🏼!

Here’s what Andrew Whitworth had to say to The Athletic, giving us a sense about why he felt so compelled to help the families of the victims.

“You always think it’s never going to be around you or involve you, but you always see that from people once you experience it. I think we just wanted to find a way to come together and really just wrap our arms around the community that we live in and that we operate and work in.”

There are numerous ways in which celebrities do their part to help in times like this, and, rather than just offer up words of support, Andrew Whitworth’s showing that the Thousand Oaks shooting means more to him by giving more than he’s required to. That’s the definition of kindness and humility, so good on him for doing this.