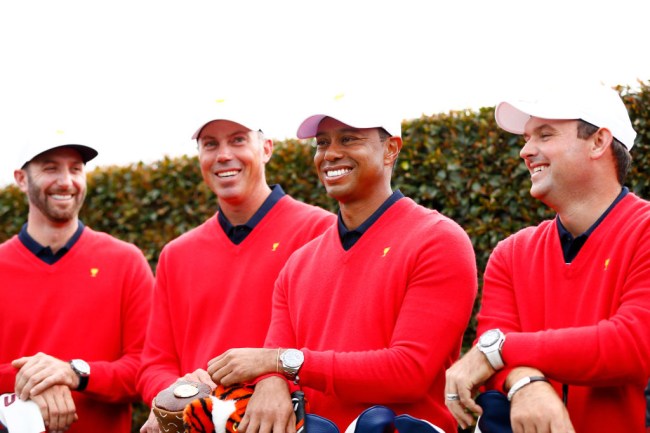 Tiger Woods and the Americans won’t be doing any partying during Presidents Cup week in Australia, well, not until Sunday at least if they go on to beat the International side for the eighth straight time.

Eleven of the 12 Team USA members hopped on a flight from The Bahamas to Australia following last week’s Hero World Challenge and apparently playing captain Tiger Woods ceased all booze consumption for the back-end of the 26-hour hour trip.

Is @TigerWoods serious about winning this week? Well, word from one insider is that he put the kibosh on in-flight "beverages" for second half of flight to Melbourne for his @PresidentsCup team and has gone full out 18th Amendment until Sunday.

Rickie Fowler, who took the place of the injured Brooks Koepka this week, said that after Woods closed the bar on the plane the team simply decided to have a dry week.

“It was a team consensus; everyone just decided to have a dry week,” Fowler told the media at Royal Melbourne on Wednesday.

“It was an idea that was thrown out and everyone jumped on board.

“We are down here to play golf and try and play the best we can and we can celebrate and have some fun on Sunday night before we head home.”

The Americans are heavy favorites as the -275 chalk to win this week. While the International side will have a home-course advantage and has a mix of youth and experience throughout the team, it would be a mighty big surprise if the Americans aren’t popping a few champagne bottles come Sunday.

Mark is a New York City-based writer and editor here at BroBible. You can follow him on Twitter @ItIsMarkHarris.