Tiger Woods Reiterates Best Part Of Winning 2019 Masters Was Celebrating With His Kids, Says It Was Special Because They Saw Him Fail At The Open The Year Before 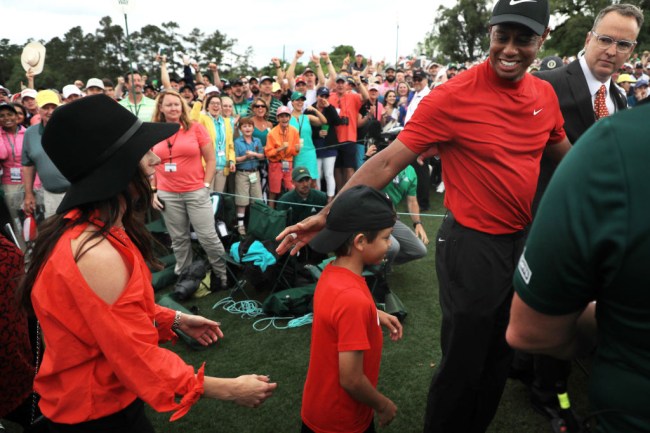 There are so many memorable moments from Tiger Woods’ final round on Sunday at Augusta during his 2019 Masters win.

There is the overall back-and-forth battle between Wood and Francesco Molinari, Woods finding the dance floor on No. 12 while plenty of other big names found the drink, Woods picking up birdies at 15 and 16 to extend his lead to two which signaled that the unthinkable was actually going to happen and of course there was the final tap-in putt on the 18th green to give him a one-shot victory and his fifth green jacket.

While all of the shots and the overall situation of the moment were incredible, Woods’ favorite part of the win was getting to celebrate with his kids as he walked off the final green.

Most of us thought he was done. We thought Tiger competing for majors was in the past and those moments were never coming back.

Tiger Woods wins the 2019 Masters. What a moment. pic.twitter.com/b3cDQch7oF

Woods talked with the media on Tuesday and explained getting to pick up and hug Charlie and celebrate with Sam was even that much more special because they saw him fail at The Open nine months prior, per Golf Digest. It was the first time Woods was in contention at a major since 2013, but Charlie and Sam had to watch him stumble down the stretch at Carnoustie, but that certainly wasn’t the case at the Masters.

“I think what made it so special is that they saw me fail the year before at the British Open. I had gotten the lead there and made bogey, double, and ended up losing to Francesco,” Woods said. “To have them experience what it feels like to be part of a major championship and watch their dad fail and not get it done, and now to be a part of it when I did get it done, I think it’s two memories that they will never forget. And the embraces and the hugs and the excitement, because they know how I felt and what it felt like when I lost at Carnoustie … to have the complete flip with them in less than a year, it was very fresh in their minds.”

As for a particular moment that stands out to Woods, it was sitting back and watching his two kids fight over who got to wear the green jacket on the plane that night.

“Just watching them fight over the green jacket on the airplane was pretty funny,” Woods said. “ ‘I want to wear it; no, I want to wear it,’ and that’s something I certainly will never forget.”