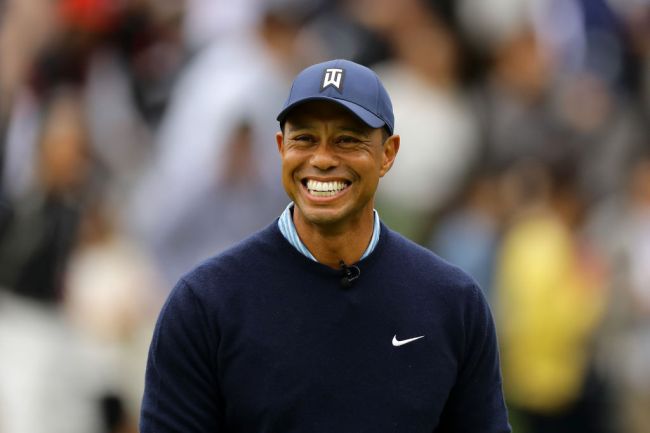 Anyone that’s ever picked up a golf club and seen the movie ‘Happy Gilmore’ has tried the iconic run-up swing at least once in their life. As someone speaking from experience, it’s extremely difficult to even make contact while attempting the Happy Gilmore swing, but what if the best players in the world attempted it?

Thanks to TaylorMade, we now have the answer to that question.

This year marked the 25-year anniversary of the movie, so at a Team TaylorMade event, the likes of Tiger Woods, Rory McIlroy, Matthew Wolff, Collin Morikawa, Dustin Johnson, and Tommy Fleetwood threw on some hockey sweaters and tried their hand at the Happy Gilmore swing.

To no surprise at all Woods was the best of the group. He was actually able to not only make solid contact but hit it extremely straight with the Happy Gilmore run-up. McIlroy, on the other hand, was without a doubt the worst, which is interesting given the fact he’s one of the best drivers of the golf ball ever.

Woods’ Happy Gilmore swing comes at the 50-second mark in the video. This was obviously filmed prior to Woods’ car crash in February.

If you weren’t missing watching Tiger Woods play golf, this video will certainly have you wishing he was healthy and back inside the ropes. Here’s to hoping that all is going well in his rehab process and we do get to see that swing of his back on Tour sooner rather than later.

Three-time major winner Padraig Harrington went super in-depth with the Happy Gilmore swing back in the day and the Sports Science video is worth watching if you’ve never seen it.