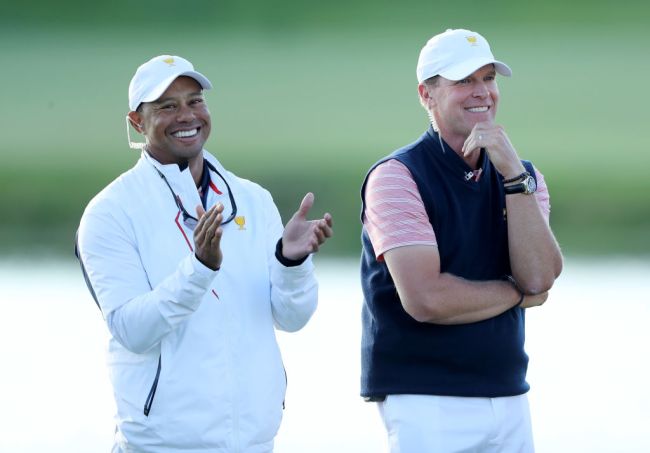 Steve Stricker made his six captain’s picks for Team USA for the upcoming Ryder Cup on Wednesday. One would imagine that Stricker announcing those six players would be the biggest news in the golf world, but his update about Tiger Woods’ rehab process just might have trumped it.

Stricker was asked during his press conference about whether or not he talked to Woods about any of the Ryder Cup decisions and, in general, just how the big cat has been as of late. Stricker’s answer was an extremely positive one.

“I’ve talked to Tiger a lot,” Stricker began. “He’s a part of this Ryder Cup family, he won’t be able to be a captain’s assistant this time around just because of his ongoing rehabilitation to try to get better and try to play golf again and that is going well. He’s progressing, he’s doing well, things are moving in the right direction”

So, based on Stricker’s comments, Woods is rehabbing to “try to play golf again,” which is huge news. Nobody knew whether or not Woods wanted to, could, or was even contemplating teeing it up again at any level. We still don’t know the true severity of the injuries or whether or not he can even swing a golf club at this point, but Stricker’s comments certainly sound like Woods isn’t giving up on anything yet.

We haven’t heard much from Woods in regards to his recovery process following his single-car crash in February. Prior to Stricker’s update, the most recent comments from Woods came back in May when he said that this recovery process “has been an entirely different animal and more painful than anything I have ever experienced.”

The 15-time major champion suffered comminuted open fractures affecting both the upper and lower portions of the tibia and fibula bones as a result of his crash. The injuries were stabilized by inserting a rod into the tibia during surgery. He also suffered additional injuries to the bones of the foot and ankle.