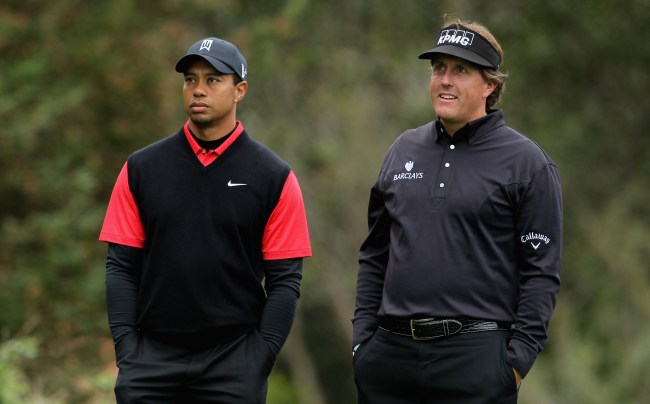 One man that’s seen Tiger Woods more up close and personal than maybe anyone else is Phil Mickelson. The two have shared their fair share of battles over the last 25 years, but one moment at the 2001 Masters sticks out for Woods’ former caddie Steve Williams.

Williams is featured on HBO’s new two-part documentary ‘Tiger’ and shared an epic story about Woods getting in the mind of Mickelson on the 13th tee at Augusta National 20 years ago.

Woods held a two-shot lead over Mickelson as they made the rounds of Amen Corner. Lefty hit a high fade around the corner of the right-to-left Par 5 with a driver. Woods elected to go with 3-wood on the tee, but it definitely wasn’t a safe play by any means.

“I could sort of sense that Mickelson was feeling a bit dejected,” Woods’ then-caddie Williams said. “He’s just hit the best drive that he can, and then Tiger’s hit a 3-wood and whipped it by him.

“And then Phil says to Tiger, ‘Do you always hit your 3-wood that long?’

“And Tiger says, ‘Further. Normally further than that.’

“It’s amazing the little games within the game Tiger would play,” Williams added. “That shot just deflated Phil’s ego, and he couldn’t bounce back.”

Mickelson and Woods both made birdie on the hole, but Woods pulled away over the next five holes to win the green jacket by two shots. With the win, Woods became the first player in the modern era to hold all four major championships at the same time. Mickelson went on to win his first of his three green jackets a few years later in 2004.