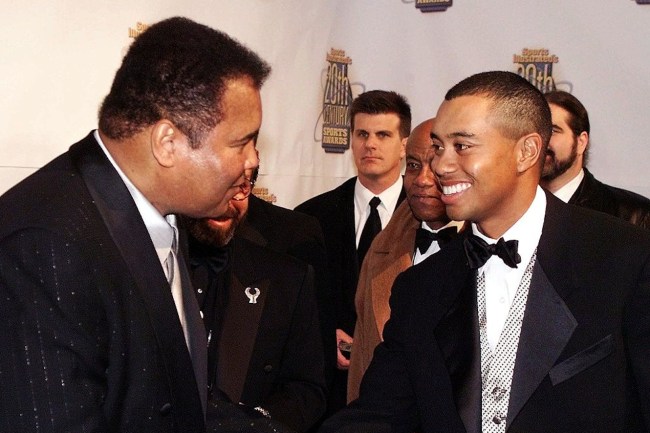 Tiger Woods has experienced plenty of memorable moments with some of the most famous people on the planet. Whether it be superstar athletes, celebrities, or world leaders, the man has shaken a lot of important and powerful hands. Having said that, it’s probably safe to say a certain encounter with Muhammad Ali sits toward the top of his list of greetings.

Woods recently sat down with Henni Zuel of Golf Digest and shared the memorable, and painful, story about the time Ali snuck up behind him in a hotel lobby and delivered an emphatic love tap. The surprise attack occurred back in 2004 just ahead of the U.S. Open and in the moment Woods’ initial reaction was turning around and swinging at the person that surprised him, which would have clearly been a mistake.

“I checked into a hotel, I believe it is where the Hiltons live, and so I’m checking in and I just have my backpack and literally my golf clubs,” Woods explained. “I’m just going up there for a day trip or stay the night and get up early the next morning and go play golf.”

“I’m in line at the front desk and I get hit in the ribs, my right ribs, and it hurt. I whip around and I’m thinking I’m just going to hit somebody. I was so pisseed and I look around and it’s Muhammad Ali.”

After Ali’s sneak attack, Woods asked Ali “Why did you have to give me a love tap that hard?”

“He was old but it still hurt. And I just can’t imagine being hit in a ring for 15 rounds like they used to fight back in the day. It’s just crazy.”

Retief Goosen went on to win the ’04 U.S. Open while Woods and his tender ribs finished T-17. The big cat already had two U.S. Open titles under his belt at that point and went on to win his third in 2008.