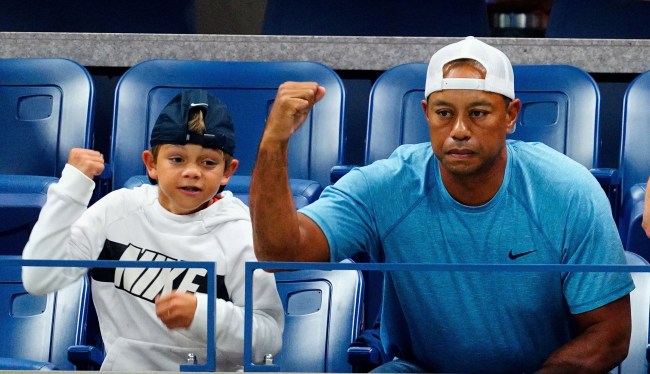 Tiger Woods’ 11-year-old son Charlie showed that he is a chip off the old block as he dominated at a recent junior golf tournament, winning by five strokes at the nine-hole event, shooting a 3-under 33 at the Hammock Creek Golf Club in Palm City, Florida.

Oh, and he did it with has famous dad on the bag as his caddie.

The man you see in the photo above next to Tiger is Derrick Payne. Payne was the caddie for the lucky young golfer that got to play alongside Charlie during another recent tournament at The Ocean Course at The Breakers in Palm Beach, Florida.

Last week, Payne spoke to Golf.com about the experience and said Woods was the absolute perfect parent when it came to not interfering with his son Charlie’s experience.

Payne, who owns and operates a Miami-area golf academy, was understandably awestruck, and a little concerned when he found out he would be caddying alongside perhaps the greatest golfer of all time because even normal sports parents can be a handful, but it turned out that Tiger made the round easy and enjoyable.

“There’s a reason people say you don’t want to meet your heroes,” said Payne. “But it became clear right away that this was the exception to that rule.”

Payne added, “It really just didn’t seem like he was Tiger Woods there. This was just Tiger, dad.”

"I wish I had his move."@TigerWoods talks about coaching his son Charlie and what they’re working on. Watch the full video: https://t.co/fMDSsqfkdZ pic.twitter.com/igqkP2v4Tn

The best part, explained Payne, was that Tiger was literally the opposite of an overbearing sports dad.

“Look, with what I do, I’m around kids who are playing tournament golf all the time,” Payne said. “We’ve got kids who are 6 years old playing in world championship events. And I’m dead serious when I say that Tiger was the poster child of what I tell my parents to do.

“He let Charlie play. He didn’t get in Charlie’s way. He wasn’t over there arguing about what club Charlie was choosing, he wasn’t lining him up, saying, ‘Hey, let’s do this or that.’ He stayed back, enjoyed it and let him play golf.”

As for the youngster that got to play his round with Charlie, Payne said, “I can’t imagine being 11 and trying to play golf in front of Tiger Woods. It was awesome.”

I can’t imagine being a 42-year-old like Payne and getting to caddie in the same group with Tiger Woods, let alone play golf in from of him. Talk about days you’ll never forget.