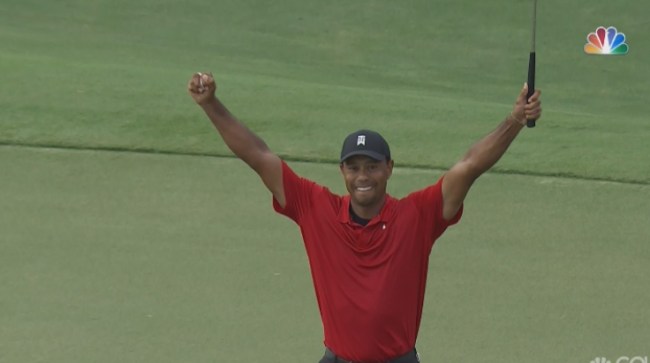 It’s been five years since Tiger Woods has won a PGA tour event but it on Sunday changed because Tiger is officially back.

Woods earned his first PGA Tour victory since 2013 Sunday by winning the Tour Championship by two shots at 11 under.

Tiger Woods, fighting back tears: “I just can’t believe I pulled this off.”

Fans from around the world were extremely excited that Tiger was finally able to get over the hump after all these years of falling short for one reason or another.

The moment we’ve all be waiting for, Tiger Woods back in the winner circle for the first time in 1876 days. Goosebumps pic.twitter.com/H2EtUfNHnF

80-time winner Tiger Woods on the parade down 18: "I just didn't want to get run over. I can't run anymore."

IT'S EVEN BETTER WITH TITANIC MUSIC!!!

TIGER WOODS IS BACK pic.twitter.com/WPhhbdq7mk

Just a taste of the scene at 18 for Tiger Woods at Eastlake pic.twitter.com/VKd64T6T55

For the first time since 2013, and for the 80th time in his career, Tiger Woods finishes atop the leaderboard!!! pic.twitter.com/dFGFqr6ggt

Did you see those crowds? Could you feel the energy through the TV? After all these years one thing never changed: Few things in sports are more exciting than golf when Tiger Woods is playing it. pic.twitter.com/kO0UOtNo9E