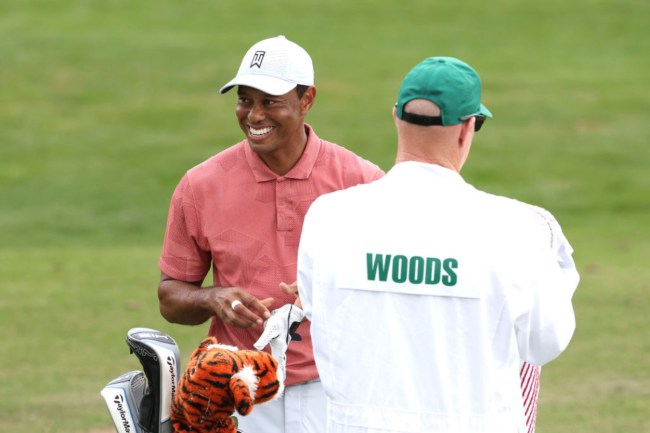 Tiger Woods has shocked the sports world with his decision to play in the 2022 Masters, his first competitive start since his car accident in February of 2021.

During his press conference at Augusts National on Tuesday afternoon, Woods’ exact words were “as of right now I feel like I am going to play.”

Woods has not played a competitive round of golf in over 500 days, but that streak will come to an end on April 7 when he steps to the first tee for the opening round of the year’s first major championship.

Around two weeks ago there were quite literally zero signs of Woods was making an attempt to play in the 2022 Masters, but things certainly changed in the week or so prior to tournament week.

The speculation hit a new level when a video was shared of Tiger Woods playing his home club Medalist on March 27. Not only was Woods playing, but his caddie Joe LaCava was in the video as well. A report suggested Woods and LaCava had been walking the course quite frequently prior to the video being leaked.

Not long after the video emerged, it was reported that Woods would be flying to Augusta to give his body a test run at Augusta National, one of the most difficult walks in all of golf.

On Tuesday, nine days prior to the opening round of the tournament, Woods arrived at Augusta National and reportedly played 18 holes alongside his son Charlie and Justin Thomas. It became abundantly clear that he was doing everything in his power to give himself even just a chance to play in the Masters.

The positive vibes continued into the weekend when Woods announced that he’d be traveling back to Augusta on Sunday and that it would be a “game-time decision” whether or not he teed it up. He officially made his decision two days prior to Thursday’s opening round.

Woods’ body – and his right leg he feared he may lose after his car crash – is reacting and recovering well enough for him to give it a go at Augusta, clearly. All reports from his Sunday practice round were very positive.

The golf world had quite the reaction to Woods’ decision to play in the 2022 Masters:

“As of right now, I feel like I’m gonna play” pic.twitter.com/gcYbMlR2vc

His golf swing looks incredible. Amazing. The walking will be demanding. I can’t wait. #themasters https://t.co/ixFKceULFA

Incredible. I would be floored if he made the cut, but Im stunned he is gonna play again. At the same time there is nothing he can do that would suprise https://t.co/OBiQhvWBWL