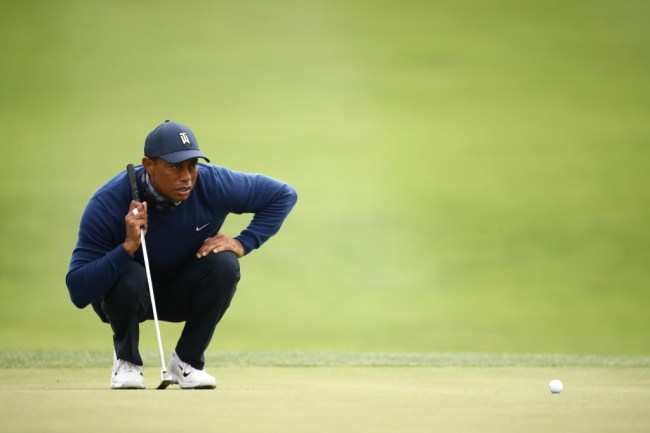 Tiger Woods and his custom Newport II Scotty Cameron putter go together like cheese and fine wine. Or for regular folks (me) like a cold, cheap beer and potato chips. Woods has won 14 of his 15 major championships with the same Scotty Cameron in the bag. The only major he won without it was his first, the 1997 Masters.

Given his track record with the putter throughout his career and the fact that he’s made only three official starts in 2020, it was basically a given that the flat stick would be in the bag for this week’s PGA Championship.

Woods very surprisingly elected to switch putters this week, however. He was seen messing around with another Scotty Cameron putter during his practice rounds earlier in the week and it made its way into his bag for Thursday’s opening round. It’s extremely similar to his go-to putter, but it’s not exactly the same.

Looks to be same putter he tested last year at the Open Championship. pic.twitter.com/HimwvBdiZh

Why would Woods decide to put a new putter in play? According to Steve Stricker, a good friend of Tiger’s and one of the most consistent putters of all time referenced that it had something to do with back pain, or lack thereof.

“It’s basically the same putter with a bit more flexibility. He’s able to change the weights around a little bit, but the length is the difference,” Stricker said. “He’s got a little more length on there, and that’s just so he can practice a little bit more without back pain. That’s what excites him the most is that he was able to put in a lot of time with this putter, and watching him putt, it looked exactly the same to me. He rolled the ball great.”

If adding a longer putter in the bag allows Woods to practice a bit more pain-free resulting in us, the viewer getting to witness him tee it up in a major, you’ll be tough to find anyone complaining about that.