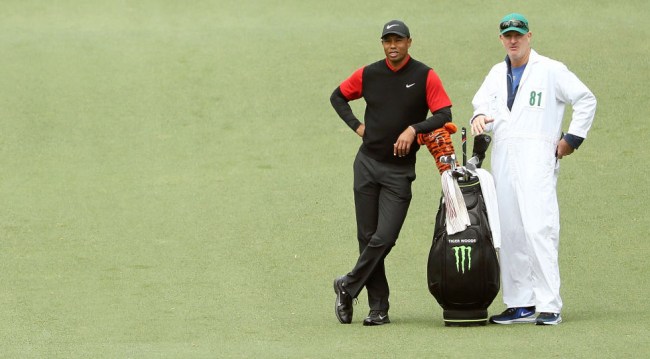 Tiger Woods is not like other golfers. All we need for proof of that is this story he told about getting his first hole-in-one when he was 8-years-old. (We really need that biopic.)

While giving a junior golf clinic at the Legends of Golf tournament at Big Cedar Lodge, Woods was asked by one of the kids if he could hit a hole-in-one for them.

Shaking his head, Tiger then called time out and proceeded to tell the story of what happened when he hit his very first hole-in-one.

“I’m 42. I’ve had 19 hole-in-ones. The last one I made was in 1999. It’s been a little while,” Woods began his tale. “My first one though… it was at Heartwell Golf Course in Long Beach, California. I was eight-years-old. I hit it and was too short to see it.

“So the ball carries the bunker, it rolls into the hole. Everybody in my group celebrates but me. I can’t see that high. So, one of the guys picks me up, shows me there’s no ball on the green. I’m excited – I run to the green, pick the ball out of the hole and I’m celebrating. And the kids came down and said ‘you idiot, your golf bag’s up on the tee.’ So I had to go back up and get my golf bag.”

Now if you are like me, and presumably many others, this is what immediately came to your mind as Woods was telling that story.

Could you imagine being the guy who picked up @TigerWoods to see his first hole in one… pic.twitter.com/8X4EXOcf0u

Here he is telling the story…

.@TigerWoods and these kids are on the same page.#LiveUnderPar pic.twitter.com/vjy6siucpV

When @TigerWoods makes a guest appearance at a @ChampionsTour event, everybody wins.#LiveUnderPar pic.twitter.com/PjUzt9aVnj

Also, just to prove once and for all he’s way better than we are at golf, Tiger deliberately tops a drive after asking the kids, “Are you ready for a big one here?”

H/T For The Win, The Big Lead