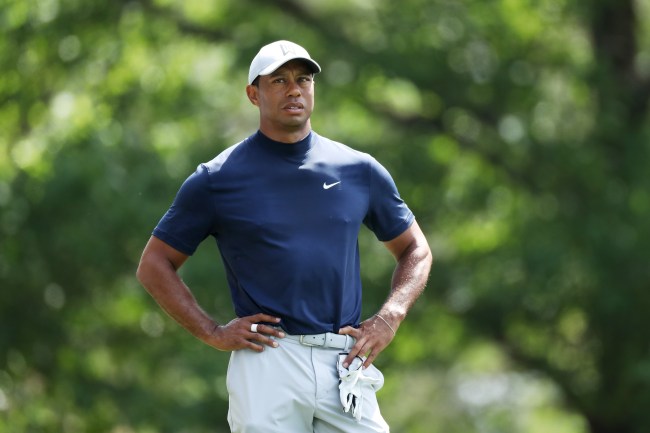 Tiger Woods is at The Masters this weekend in search for his fifth green jacket, but, had you asked the 14-time major champ just two years ago if he could have envisioned him playing Augusta National again for this very moment, he may have told you he didn’t think it’d happen. That’s because, while accepting an award yesterday from the Golf Writers Association of America, Woods detailed just how close he was to thinking his golf career was over.

While attending The Masters’ Champions Dinner, which presented him the Ben Hogan Award, which is given annually to a person who continues to be active in golf despite a “physical handicap or serious illness,” following his multiple surgeries, Tiger Woods mentioned how, at the 2017 dinner, he thought he was done, going in-depth about all he had to go to just to get to that year’s ceremony. Here’s what Woods had to say, per ESPN.

“I was done at that particular time.

“In order to actually come to the dinner, I had to get a nerve block just to be able to walk and come to the dinner. It meant so much to me to be part of the Masters and come to the Champions Diner. I didn’t want to miss it. It was tough and uncomfortable. I ended up going to England that night, saw a specialist there, [and] they recommended unfortunately for me the only way to get rid of the pain I was living in was to have the spinal fusion surgery. So I decided to go to Dr. Richard Guyer in Texas and had the surgery.

“It was not a fun time,” Woods said. “Tough couple of years there. But I was able to start to walk again. I was able to participate in life. I was able to be around my kids again, be at their games and their practices. Got to take them to school again. These were all things I couldn’t do for a very long time. Golf was not in my future or even in my distant future. Playing the game again, I couldn’t even do that with my son Charlie. I couldn’t do that in my backyard. After the surgery, I started to feel a lot better.”

Woods added that the surgery that Dr. Guyer performed, which was on April 19, 2017, required him to put his golf clubs down for six months, and, when he did get permission from Guyer to finally hit a driver after his spine had been fused, he “was a little bit apprehensive,” with his first attempts traveling only about 90 yards. That’s pretty remarkable to hear coming from Tiger Woods, who’s, arguably, the most influential golfer ever.

This isn’t the first time that Woods’ career has been mentioned as almost ending in 2017. While talking to Dan Patrick last year, former golfer and current analyst Nick Faldo detailed some of what Tiger had gone through. Given all that Tiger Woods has had to deal with physically and emotionally, it’s nothing short of remarkable that he’s at The Masters this year and on the hunt for another green jacket.