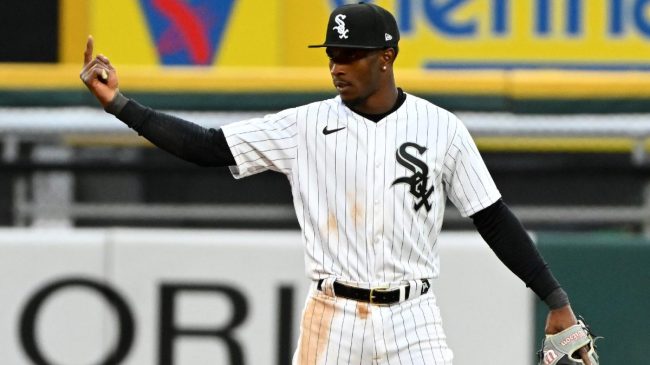 Wednesday was a rough day for the Chicago White Sox.

They were swept on the road in a double-header by division rival Cleveland. Not only did the Sox take the losses, they played pretty poorly in the process.

Game 1 was miserable as the Chicago defense committed four errors in an 11-1 blowout. While Game 2 was closer, the White Sox bats stayed quiet in a 2-1 defeat.

Frustrations began to boil over for the visiting team near the end of that first matchup.

Chicago shortstop Tim Anderson began the afternoon by overthrowing his first baseman while fielding a grounder from the Guardians’ leadoff hitter. It would be his first of three errors on the day.

In the second frame, Anderson fumbled a pair of attempts which helped Cleveland jump out to a 10-0 lead. The Guardian faithful gave him a hard time for the remainder of the afternoon.

Anderson was able to notch an RBI double in the sixth inning to plate the White Sox only run of the game. Cleveland fans continued to rib the shortstop, though, which led to his flipping the crowd off on national television.

The greatness of Tim Anderson in a graphic chart & a graphic gesture (via @JomboyMedia) pic.twitter.com/bQKVOtiskQ

We feel the same way about this game and Cleveland @TimAnderson7 pic.twitter.com/HM1dIBoYAU

Obviously, he was referencing the double that Anderson hit a few innings back.

Things haven’t gotten much better for the shortstop, as his struggles have carried over into Thursday’s action. He committed another first-inning error moving his total to four defensive miscues on the series.

Hopefully he’ll be able to keep those middle fingers out of sight in finale.