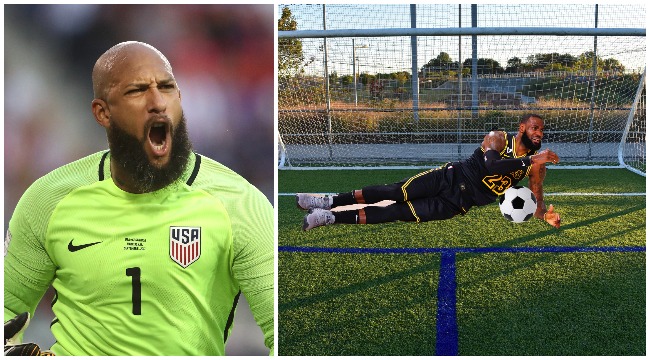 If you’re making a case for the best athlete in the world, you must first define what constitutes an athlete.

My definition is: A person who can be plucked from their respective sport and succeed in an array of other sports.

Deion Sanders and Bo Jackson are living data points that support this definition. LeBron James, a guy who caught 57 receptions for 1,160 yards and 16 touchdowns as a junior in high school and appears to be made of Tungsten steel, is most definitely in the mix.

On the Endless Hustle Podcast this week, we spoke with Tim Howard, the greatest American goalkeeper in history, about how (or if) LeBron’s freakish athleticism would translate in the soccer net. His answer does LeBron no favors.

Legendary goalkeeper @TimHowardGK's take on whether LeBron could excel in goal right now with no formal training: pic.twitter.com/0qB29OqJ2O

As arguably the greatest America soccer goalie of all-time, do you think LeBron would perform in the Premier League if you dropped him in there today? No formal training.

No chance. No. Absolutely not.

Not to pat myself on the back for a goalkeeper. We’re very harshly criticized and it’s part of the narrative. It’s such an incredibly difficult art to perfect. I often talk about the greatest athletes for me are hockey players.

6’4”. 220 lbs. Skate like a ballerina. You know be able to hit like a linebacker. Stickhandle. So they’re the best.

In goal, the ball’s coming at you 60-70 mph and you’re having to explode and get your body behind it, but also cushion it like you’re in an egg tossing contest, right? You have to be really soft with your hands and put it in the right places.

That’s not always easy to do and so that would be an impossibility for LeBron, even though I think he’s a brilliant athlete.

Tim makes a convincing argument, but what he’s not taking into account are the referees. LeBron would somehow finagle a situation in which he uses the refs as shields and anyone who makes contact with him will be handed a red card and flogged publicly.

We talked about SO MUCH more with the thoughtful Tim Howard, including: