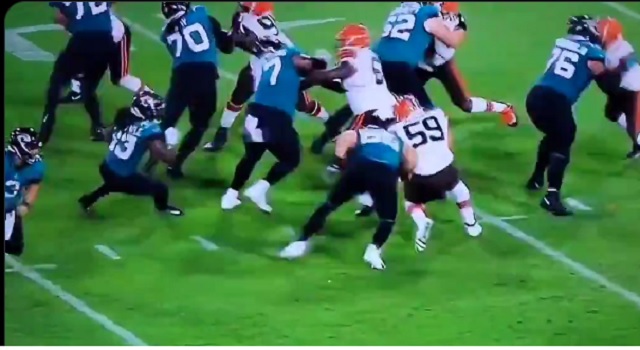 Tim Tebow is having a rough transition to the tight end position.

On Saturday night, the former NFL QB played his first official game at tight end and was called to deliver a block for a runner near the goal line.

Tebow appeared to whiff on the block and fell headfirst into a teammate but still somehow prevented the defender from making the tackle.

Tebow just threw the worst block in history and it worked 😭😭😭

Tim Tebow whiffs on a block then runs head first into his own teammate.

My favorite part isn’t even the technique, but the fact that he straight headbutts his teammate in the chest well after the fact. https://t.co/KJRu5cCjTw

He looks like an actor cast in a football movie who was cgi’d in later and had to do a lot of motion while not actually being able to interact with anything that’s going on https://t.co/WQhKjPD9Gm

Tebow out there giving it his all on that block attempt. pic.twitter.com/DQJt2tUmM4

Lmao this guy does not deserve to be in the league over someone who’s grinded harder then him https://t.co/hI0atbexAw