Report Suggests Tim Tebow Should Fear Being Cut By Jaguars, Which Shouldn’t Be A Surprise To Anyone 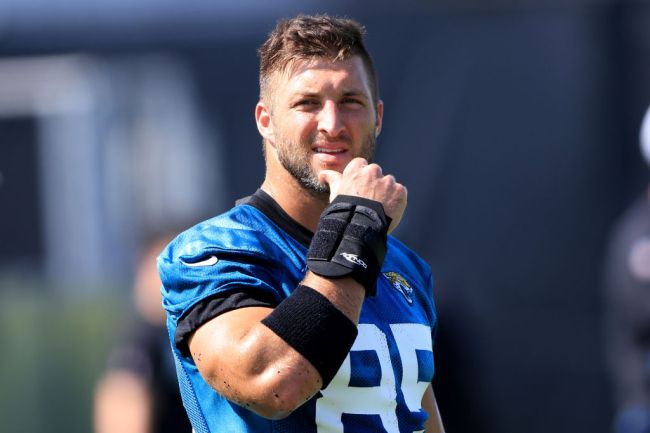 We’re less than three weeks away from the start of NFL training camps and, as per usual, there are major storylines involving each team around the league. The biggest storyline for the Jacksonville Jaguars may be the most unique, however, seeing as it has to do with a 33-year-old man that’s never played tight end named Tim Tebow.

Reactions of Tebow signing with the Jags to play tight end were mixed, to put it lightly, but a vast majority of NFL fans out there saw the move as a rather genius PR move as Tebow undoubtedly gets folks talking.

Related: Urban Meyer Says Tim Tebow Has Only Done A ‘Decent’ Job At Tight End, Gives Coach Speak About Him Being A Locker Room Guy

According to CBS Sports’ Patrik Walker, that’s precisely what the move has turned into as he believes that Tebow should be in fear of being cut. The main reason, again, is that this is a 33-year-old that’s never played a down as a tight end. Being friends with your old college coach can only take you so far.

“Tebow had to know this was a long shot when he signed on, and his only saving grace might be his relationship with Urban Meyer — the reason he’s getting this shot in the first place. That said, even Meyer is claiming Tebow will be evaluated like others on the roster with no special considerations. Time will tell if that’s true, but if it is, Tebow’s experiment at tight end could end soon.

Headlines aside, this is the most sensical cut to be made by the Jaguars, unless they want to sacrifice a seat on their 53-man roster for a 33-year-old who’s never played tight end before and came out of retirement to try.”

You can’t knock Tebow for trying his hand at tight end and calling up Meyer for said opportunity, but it certainly seems like this experiment will end prior to the start of the 2021 NFL season.