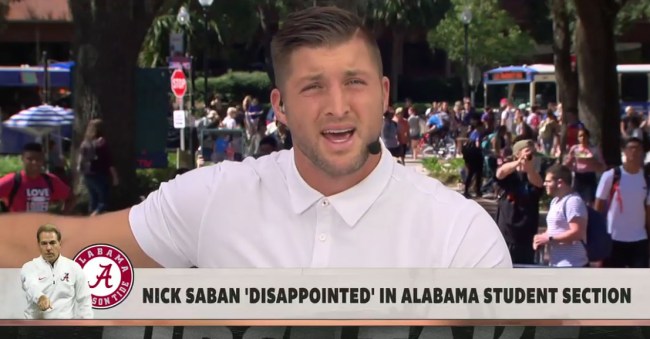 Did Tim Tebow go to the Skip Bayless School of Terrible Hot Takes over the summer when he wasn’t busy flailing at curve balls? Because he just agreed with Nick Saban’s terrible take that University of Alabama students are bad football fans.

In case you missed it, Saban whined this week that “there weren’t more students at the last game.” A game where the Crimson Tide were favored by 49 over FBS punching bag Louisiana-Lafayette.

“I don’t think they’re entitled to anything, either. Me personally, I think it ought to be first-come, first-serve. If they don’t want to come to the game, they don’t have to come. But I’m sure there’s enough people around here that would like to go to the games and we’d like for them to come too because they support the players,” said Saban. among other things.

“I agree with him. I love it,” said the Binghamton Rumble Ponies’ left fielder. “I think the fans are getting so entitled there at Alabama, specifically the students. Listen, as a student, you’ve done nothing to win all these titles, Okay? You spent a little bit of your daddy’s money to show up at a game and got to go school there. But you say you’re the best fans in college football, well you need to show up. I don’t care if you’re playing Louisiana whoever, if you’re playing Hoover High School, you show up to the game and you support your team. Because if you want to say you’re the best fans in the country, you show up every game no matter what. Coach Saban is right. Alabama students, you need to show up for your team.”

That “spent a little bit of your daddy’s money” jibe and calling Alabama students “entitled” isn’t going to very well with a lot of people, especially in Tuscaloosa.

Schedule top teams in that slot and maybe the student wont stay in the dorms watching Netflix or hanging out having fun. Why attend a game that will be a blowout. What's to cheer about Tebow? This is ridiculous.

Sports is entertainment and everyone knew this game wasn't going to be entertaining. It's like Paul McCartney announcing his next concert will consist of him playing "Hey Jude" and nothing else 30 consecutive times and then trashing people for not showing up.

We can attack the students for being entitled all day long, but it won't make them want to go to an 11:00am kickoff against Lousisiana-Lafayette. You want to actually fix this problem? Do away with mid-year G5 opponents, move to a 9 game SEC schedule, and sell beer in the stadium

Hey @TimTebow, remember when we beat you so bad we made you cry in the SEC championship game? https://t.co/7GVKGIAsQZ

Wonder how many @’s Tebow is getting on social media right about now.