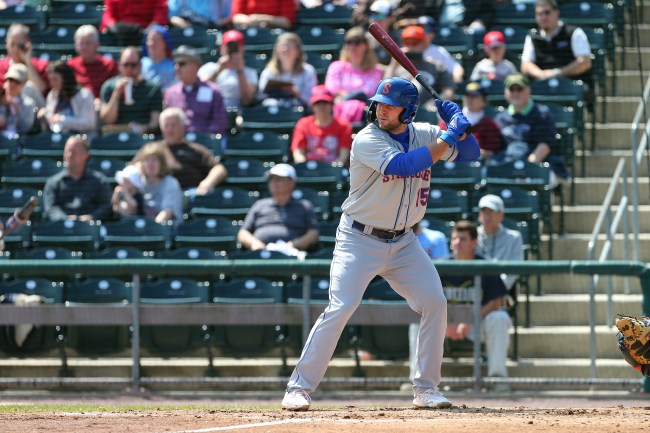 Tim Tebow is determined to make it as a 2-sport pro athlete despite the fact that he hasn’t played in an NFL game since 2012 and has never swung a bat at the Major League level.

Running a successful Minor League Baseball team is all about getting fans in the seats and this means that most teams run outrageous promo nights all season long. The Mets decided to circumvent the need to be interesting (and competitive) every night by signing Tim Tebow who remains a celebrity despite being a guy who legitimately peaked in college.

Tim Tebow finished his 2018 Double-A season batting .273, slugging .399 with 6 HRs and 36 RBIs in 84 games. Apparently, hitting 6 HRs in 84 games was good enough for the Mets to promote him to Triple-A ball, the last stop before the majors. A quick look at how Timmothy’s progressing this season at the Triple-A level shows that it’s a complete and utter shit show of mediocrity.

Robert Centorani of Binghamton Press & Sun-Bulletin/USA Today wrote a pretty scathing article about Tim Tebow’s season thus far and if you’re a diehard Tebow fan this might hurt to read.

On a dreary and drizzly Friday night before a paltry crowd of 2,728 at Syracuse’s NBT Bank Park, Tebow went 0-for-3 with two strikeouts as the Mets lost, 9-1 to Scranton/Wilkes-Barre.
He didn’t look comfortable or confident and he has no reason to be either of those things. Seventy-three at-bats into the season and he has 10 hits, none of which the 255-pounder has hit over the fence. Oh, and those 29 strikeouts … well, the folks who watched him last season in Binghamton wouldn’t be surprised by that number.
To characterize Tebow’s 2019 baseball season as anything other than a disaster at this point would be sugar-coating the obvious. (via)

Calling it ‘anything other than a disaster’ would be too nice. That’s not exactly what you want to hear about a prospect at the Triple-A level. What changed? It sounds like he’s facing top-tier talent for the first time in his baseball career and he’s woefully unprepared:

The three pitchers Tebow faced Friday — are ages 27, 26 and 28 and all of them had at least four years of professional experience — two with big-league innings in their past.

“It’s very difficult right now, some of the pitching that’s coming at him,” Syracuse manager Tony DeFrancesco said. “He hadn’t seen much of that at Double-A last year. Guys are pounding him in and he has to learn how to make adjustments.”

Tebow’s doing everything he can to get out of this slump. The article goes on to praise his work ethic as the lone shining star on Tebow’s season saying that he basically lives inside of the batting cage. They then walk that back with a quote from the coach about how there are only so many swings your arms and wrists can take and at some point you need a little luck and you need to get that ‘feel’ that batters excel with.

Tim Tebow has 10 hits in 77 at-bats so far this season which add up to 13 total bases (three doubles, no triples, no HRs). He’s played in 23 games so far and is boasting .193 On Base Percentage which isn’t what you want to see from the Designated Hitter who’s tasked with getting on base and putting fans in the stands.

Tebow did take an out-of-character shot at the NY Jets when the Mets sent him to Triple-A after Spring Training this year. Jose Canseco has offered to help Tebow fix his swing and start hitting like a champ. So it’s obvious that Tebow’s still making headlines despite his Triple-A effort being the professional sports equivalent of a wet fart.

It remains to be seen how long Tim Tebow’s Triple-A stint will last but you can read the full USA Today article by clicking that link. Just make sure you don’t have your Ad Blocker turned on because they won’t let you read it. Though, if you do have it turned on you’ll see that there are OVER ONE HUNDRED ads that load on every USA Today page which is insanity.