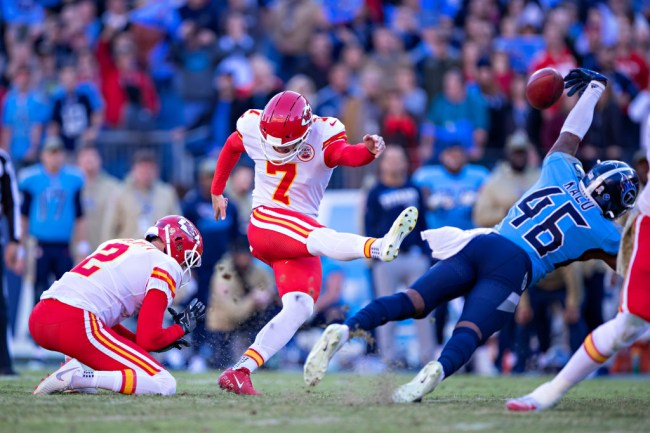 The Tennessee Titans stunned the Kansas City Chiefs 35-32 on Sunday spoiling Patrick Mahomes’ return from injury and there was no lack of drama late in the contest.

In one of the wildest finishes we’ve seen of the NFL season, the Chiefs lined up for a potential game-tying field goal with two seconds left on the clock, but Joshu Kalu blocked the 52-yard attempt to give the Titans their third win in four games.

THE @TITANS BLOCK IT TO BEAT THE CHIEFS! #KCvsTEN #Titans pic.twitter.com/QE8FrTwbMB

You can easily point out Kalua on the far-left side of the Tennessee line and at first, you may think he jumped the snap a half-second early, but when you break it down it was actually a perfectly timed rush off the ball.

A flag, of course, wasn’t thrown, but it’s worth pointing out the officials never reviewed the play either because it’s not a reviewable play.

Here’s a breakdown frame-by-frame of the play. The NFL officials didn’t screw something up, people, everyone outside of Kansas City should be rejoicing.

I thought Josh Kalu looked offsides in real time. He didn’t. These are the first four frames from the snap. What an unbelievable jump to block that. #Titans @NC5 pic.twitter.com/wiWeLDiP4Y

The Titans improved to 5-5 on the year keeping their playoff hopes alive while the Chiefs all of a sudden sit at 6-4 after suffering their first road loss of the season. It was a tough loss for Kansas City as it held a nine-point advantage with 11:54 left in the contest.

Mark is a New York City-based writer and editor at BroBible. Go follow him on Twitter @MarkAndHisWords.