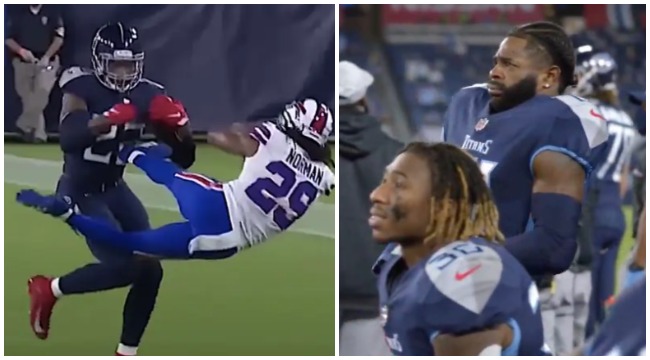 It’s been a full 48 hours since Derrick Henry’s near homicide attempt and he has yet to be apprehended by authorities.

His girlfriend is still standing by him, which is brave and nice, but we’ll see how strong their love is under the pressure of a highly-publicized trial.

The Stiff-Arm Heard Round The World has been dissected in every which way possible and at this point, I’ve seen the clip of Derrick Henry trucking Josh Norman more than I’ve seen my own grandparents since graduating college.

Let’s take one last look at how Henry’s Titans teammates reacted to the most impressive play of the 2020 NFL season.

I’m a sucker for mic’d up clips, so the whole thing is worth a listen, but the play in question starts at the 1:53 mark.

I love how everyone’s hating on Josh Norman like he is a Half Man. With this stiff arm, Derrick Henry would have killed 99% of everyday Americans.

"That's a grown man he tossed like that. I gotta go lift some more weights or something. I don’t know. I never did that." pic.twitter.com/vTvOxZe03X