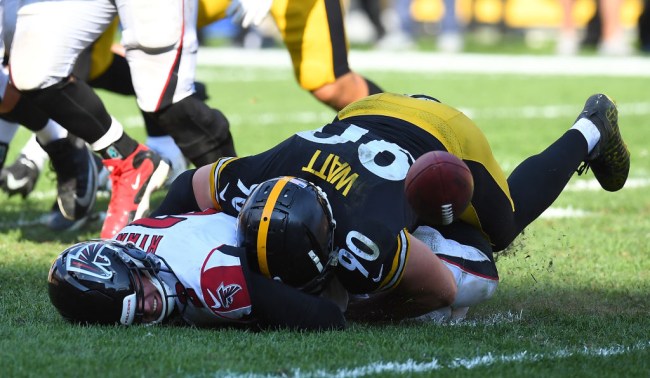 Another week, another egregious, mind-bending roughing the passer penalty. The victim of the penalty this week: Pittsburgh Steelers linebacker T.J. Watt. Watt, who produced his second 3-sack game of the season, went low on Matt Ryan during the Steelers 41-17 beatdown on the Falcons. Hitting a QB low is illegal, but you actually have to, like, hit him.

Warning: this video may contain content not suitable for young children.

Steelers coach Mike Tomlin could no longer hold back his frustration when addressing the league’s overprotection of its valuable position. According to ESPN’s Jeremy Fowler, Tomlin said:

“Some of the other stuff, man, is a joke. We gotta get better as a National Football League. Man, these penalties are costing people games and jobs. We gotta get ‘em correct. So I’m pissed about it, to be quite honest with you.”

T.J. found more support from his older brother, who was equally upset with the soft call.

Would love to hear the explanation on how this was “roughing the passer” pic.twitter.com/Fv7reMBH84

Referees have thrown over double the number of roughing the passer flags this season over the same span from last season. That trend will continue to tick upward as the NFL announced that there will be “no changes” to the rule.

These are already a point of contention in the opening weeks of the season, imagine the pushback the league is going to get when a playoff game is on the line. Yikes.