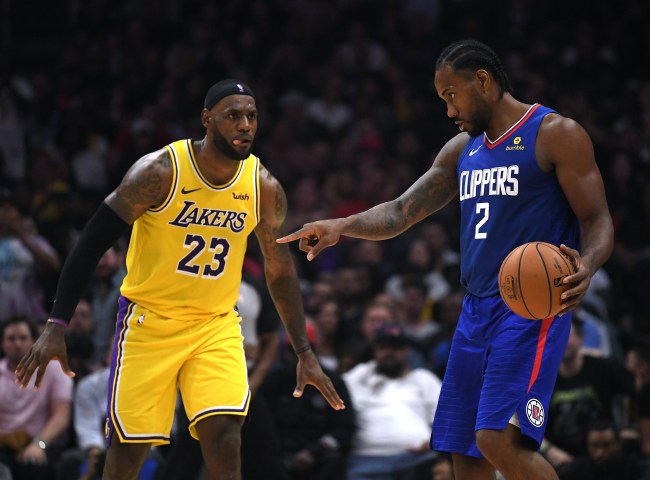 Human beings have a hard time accepting change. Remember when Zuckerberg released the News Feed in like 2007 and everyone was aghast with privacy concerns, and now I don’t know how else to live without checking up on my ex’s relationship with her personal trainer.

Sports fans are even more stubborn. The NFL’s yellow first down line took some adjusting to, the skycam was initially awkward until it produced the best camera angle of all-time last week, and in-game instant replay is still raising concerns about stunting the natural flow of the game.

Last night, for the debut games of the 2019-2020 NBA season, TNT unveiled a new on-screen shot clock graphic that counts down the shot clock each possession in a small circle at the top of the key. TNT still left the clock ticker inside the scoreboard graphic on the bottom right of the screen, so fans had two ways to check on a clock that it nearly always trivial.

Shot clock … on the floor? pic.twitter.com/6wegU9ieg9

I think it’s a nifty advancement, aesthetically pleasing, but entirely unnecessary. I’d rather TNT put something useful in the graphic, like the shooting percentage of the player currently possessing the ball in the exact location he’s possessing it. I don’t know, that could be annoying.

I hope you do too.

I hate the shot clock being on the floor for no other logical reason besides me hating change. I've watched thousands of basketball games that didn't have it and they were perfectly fine

what is the dumb shit with the shot clock on the floor? take it off immediately please pic.twitter.com/QtSCadpnB7

Hi @NBAonTNT I do not like your shot clock on the floor at all times.

Fast forward two years, we will not be able to watch a game without the shot clock graphic. Us humans really have no idea what we want.