TNT’s Kenny Smith Gives Us His March Madness Predictions, Fires Back At Knicks Fans, And Doles Out Advice For College Basketball Fans Ahead Of NCAA Tournament 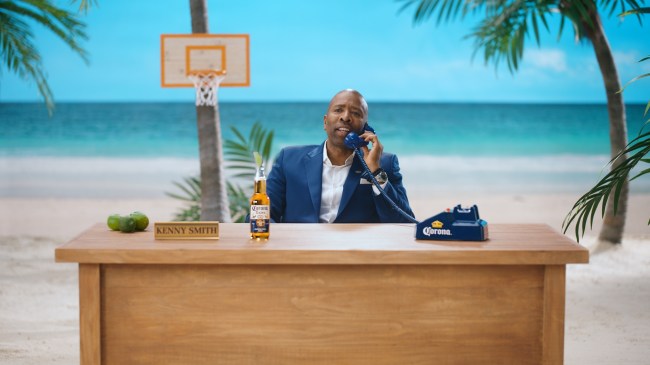 Basketball analyst Kenny Smith is going to be extremely busy this March. Not only is he going to be covering the NBA but he’s also going to headlining CBS’ March Madness studio show and is replacing Tony Romo as the official Corona Hotline operator where he will be dishing out all sorts of basketball-related advice at 1-844-9-CORONA until April 6.

Before the start of the NCAA tournament, we got to sit down with Kenny to get his March Madness predictions, his reaction to Knicks fans being mad at him, and why he wants everyone to chill and enjoy this year’s tourney.

Despite the fact the North Carolina is having an off year, Kenny is still pulling for his alma mater to win the tournament while also favoring Gonzaga and Baylor who have both had tremendous seasons going into March.

Anytime there’s March and North Carolina is playing they’re going to always be my favorite, I don’t care what position we’re at or what we’re doing. Anytime they’re playing March they’ll always be my favorite. Gonzaga and Baylor all year have demonstrated they’ve been head and shoulder above everyone else, they have youth, they have experience, so those two teams have been great, but those two teams alongside Carolina, I’ll go with those.

While everyone is out rushing to fill out their NCAA tournament brackets right now, Kenny wants everyone to grab a Corona, relax, and not take things too seriously this time around considering everything we’ve been through in the past year with the pandemic.

We want you to have la Vida mas fina, don’t sit on the edge of your seat, just sit back and enjoy this one, that would be my suggestion, don’t be as intense as you always are this time of year, just have a more of a relaxed attitude because last year at this time, we were shutting things down, this year we’re amping things up. So that’s something great as well…we’re just having fun this year, don’t get caught up this year,

On an NBA-related note, we asked Kenny about the backlash he received from Knicks fans during the All-Star game when he made an offhand comment about the team being good for the first time in 20 years. Kenny feels like he was just stating the facts and isn’t sure why Knicks fans got so mad at him.

Kenny Smith fires back at Knicks fans and double down on the fact that the Knicks haven't been good in 20 years. pic.twitter.com/TAh7DT6gaJ

Now through April 5, fans can call Kenny at 1-844-9-CORONA to receive refreshing advice, learn how to enter a sweepstakes* for a chance to win $250 in Fanatics FanCash, receive a home delivery discount code courtesy of Drizly, and more.