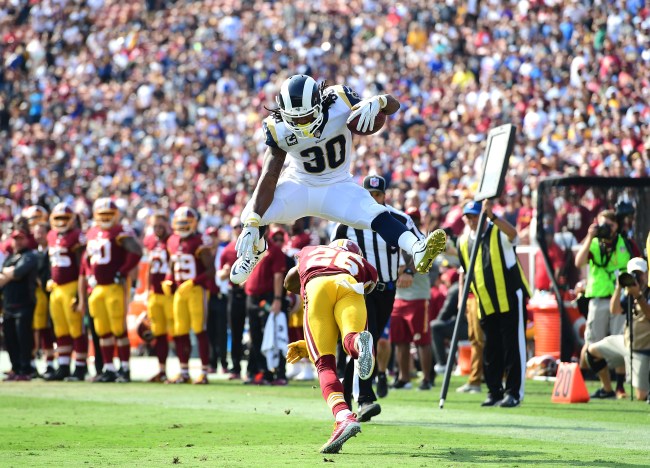 Dogs are better pets than cats. This is a fact and it’s not up for debate or interpretation.

Cats will take a big ol’ fat shit in your shoes and leave it there. They’ll bring you home a dead rat thinking they’re doing something nice for you. Cats will ignore you after you come home from vacation and act like they were better off without you. Pet your cat for too long and you might find that it swats you with its claws whenever it gets bored.

Dogs will save your toddler from a burning building. They will rescue drowning victims, or sniff out a million dollar drug bust. When you come home from vacation your dog will be so excited to see you that you have to calm the dog down because it’s so overwhelmed with emotion and you’re worried the dog might actually have a heart attack. Dogs will fend off bears, mountain lions, and burglars while protecting their families. Cats? Not so much.

Dogs > Cats. But not in the eyes of LA Rams running back Todd Gurley.

In a recent interview with ESPN, Todd Gurley dropped this interesting quote about how he wants to get some cats this year and become a ‘Cat Dude’ which is his version of a Crazy Cat Lady.

Todd actually went on record in an interview and said he ‘hates dogs’ and even in 2018 this is one of the most un-American statements I’ve ever read.

ESPN: I meant: What do you like to do for fun? But we can talk about what you like in a woman.
TG: Oh, my bad. [Laughs] I love riding bikes — I just got an electronic bicycle. It’s pretty sweet. If it dies, you can still pedal. I like to play pranks. I like big-kid stuff.

ESPN: What would you list as your dislikes?
TG: Driving. Waking up early. And I hate  dogs. I love cats, though. Cats are so cool. Actually, I’m probably gonna get some  this year.

ESPN: Sorry, you’re gonna get a bunch of cats?
TG: Two, at least, so they can, you know, conversate or whatever. I mean, how would I feel if I was a cat and someone bought me and just left me by myself  for like 20 years?

The full interview is a great read. Todd Gurley’s a funny dude and I highly suggest checking it out. He talks about fantasy football:

ESPN I was terrible in fantasy last year, so I’m picking first. Who should I take, you or Le’Veon?
TG: Me.
ESPN: Le’Veon is fighting for the deal you just got, though. He’s motivated.
TG: That ain’t got nothing to do with the stats. I was No. 1 last year in fantasy. You want me for sure. If not, you can’t go wrong with AB [Antonio Brown] or DeAndre Hopkins. (via)

He also talks about LeBron coming to Los Angeles, his Rams teammates, and pretty much everything else under the sun. It’s refreshing to see a player speak so candidly in an interview.

READ NEXT: Todd Gurley Just Got PAID By The Rams, A Salty Le’Veon Bell Responds On Twitter After Getting Franchise Tagged