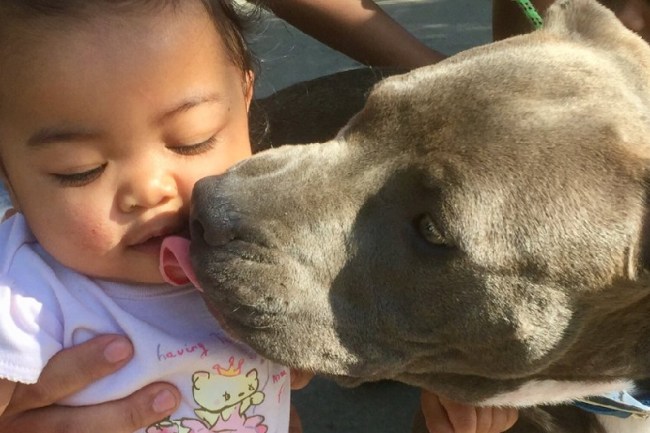 I’m not a religious man but the most convincing argument you can make to me of the reality of a higher power is the existence of dogs. Because in every possible way, they are a transcendent species and a reflection of a divine spirit beyond our human comprehension.

According to Fox 40, Sasha saved a toddler and her family from a nearby fire that spread to their home just before midnight on June 3 in Stockton, California.

As flames began to mount at the fourplex on East Yorkshire Drive, Sasha began to bark relentlessly and bang at the back door.

“I open it and she runs in and starts barking at me like crazy and I was like, ‘OK, this is weird. This is not like her,'” owner Nana Chaichanhda said.

Chaichanhda then noticed her cousin’s building was on fire and darted into the room where her 7-month-old daughter slept to retrieve her only to find that Sasha had taken action.

“She had already had my baby by the diaper and was dragging her off the bed,” she told Fox 40. “I was like, ‘Oh my gosh, what are you doing?'”

This is the fire that a pit bull alerted her family to in Stockton! They credit her with saving their lives https://t.co/vHX2iEpTft pic.twitter.com/vDs1B5mnic

Fire crews responded quickly and expelled the fire, but not before the flames reached the attic and deemed the apartment uninhabitable.

“It meant a lot. I owe her everything. If it wasn’t for her, I would have still been in bed and things could have taken a worse turn,” Chaichanhda said.

Chaichanhda and her cousin are now staying with their aunts that also live in the fourplex as they figure out their next steps. They set up a GoFundMe page to “get into a new home, also provide clothes, shoes and food for my family.” Their goal is $6,000 and at the time of me writing this, they have generated over $5,100 in donations.

What ever is leftover after the Chaichanhda’s get back on their feet should be used to buy Sasha an endless supply of treats and tennis balls. Someone needs to see to it that this happens.