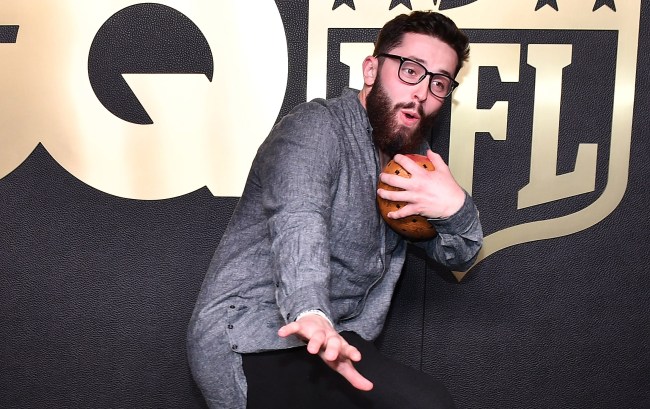 As we have seen before on more than one occassion, Tom Brady does not give a f**k if you are a kid when it comes to any kind of competition.

Last year Brady displayed how ridiculously deep his competitive drive runs when he absolutely refused to dial it back when playing dodgeball versus some women and children. Even if they are family.

A few days later Brady continued his savagery towards women and children by embarrassing his son with his “speed” during a workout session.

And let’s not forget how competitive TB12 is on the golf course… when playing a round with his parents.

So yeah, Brady ain’t care who you are, you’re going down.

Which explains why when after Mary Kay Cabot of the Cleveland Plain Dealer tweeted a video showing Baker Mayfield hosting a football camp for kids, Brady simply had to chime in on Twitter.

“If they all flipped and attacked you how many could you take? @bakermayfield?” someone asked Mayfield in response to the video.

If they all flipped and attacked you how many could you take? @bakermayfield https://t.co/J5od4NAA8I

Mayfield, not being Brady, but still being a competitor, answered, “Which age group? As a general thought, I say at least 50+.”

Which age group? As a general thought, I say at least 50+

Brady, being Brady, was not down with Baker’s response and had already formulated a game plan for taking down the children.

“You’re selling yourself short. Gotta escape the pocket, reset, and take out 8-10 at a time,” Brady commented.

You’re selling yourself short. Gotta escape the pocket, reset, and take out 8-10 at a time. https://t.co/9rEr4Cnzl1

Perhaps this is something that Tom can better explain to Baker the next time they’re hanging out at the Kentucky Derby together.

If they do, maybe Brady will let Mayfield hold his rings again.