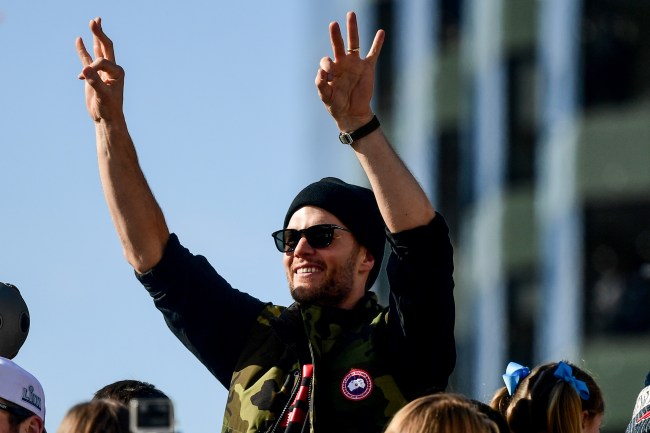 Tom Brady is the greatest QB in NFL history, is married to a supermodel, has won six Super Bowl rings and is making bank playing a sport that, at age 41, he shouldn’t still be excelling in. With all that success in his life, there aren’t too many people who would feel too bad for Brady for not having something, right?

Although Tom Brady, seemingly, has everything (and more) than any normal guy could even imagine, because the future Hall of Fame signal-caller has taken discounted contracts over the years, he’s actually left even more millions of dollars on the table. During his NFL career, Brady has never been the highest-paid quarterback in the league; which is insane considering he’s won the most since first snagging the starting role during the 2001 season.

With peers like Russell Wilson, Ben Roethlisberger and Aaron Rodgers all getting mega-deals and cashing in, Tom Brady has taken less money to help the overall financial position of the Patriots — and, according to Business Insider, it may have cost him about $60 million. Take a look at the chart that Jenny Chang of BI put together to show Brady’s actual earnings and what his potential earning could have been when compared with some of his peers. 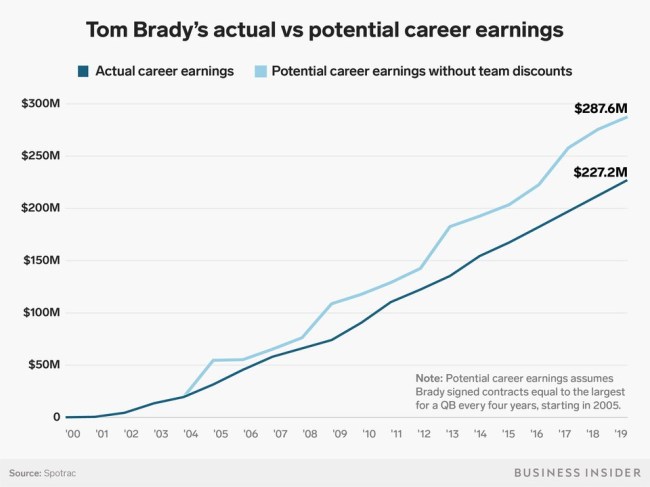 Sure, Tom Brady’s made nearly $300 million in his NFL career alone — not to mention all he makes from endorsements or the crazy amount he charges fans for autographs — but, still, a normal guy would give his right hand for $60 million over a lifetime, let alone a two-decades-long NFL career. It seems Brady’s the biggest giver of them all.

To land on that figure, Business Insider compared Tom Brady’s discounted contracts to those of other quarterbacks in the league who signed big-time deals. While the original article points out that the figures “aren’t an exact science,” here are the other players Brady’s salary was measured against.

We imagined a scenario where Brady signed new deals in 2005, 2009, 2013, and 2017 that were the equivalent of the going rate for the top quarterback at the time. In each of those four years, we gave Brady a new contract equal to that of the biggest contracts for veteran quarterbacks that had been signed before that season or the previous season. We also imagined that Brady only played four seasons under each contract and then signed a new deal.

Here are the contracts we used:

There have been even richer contracts signed by other players in the NFL since then, especially at the quarterback position, but you get the gist; Tom Brady has lowered his own market value for a better chance of winning. Football’s the ultimate team sport, and if leaving this amount of money isn’t the most clear sign that Brady’s all about the good of the Pats, what is?