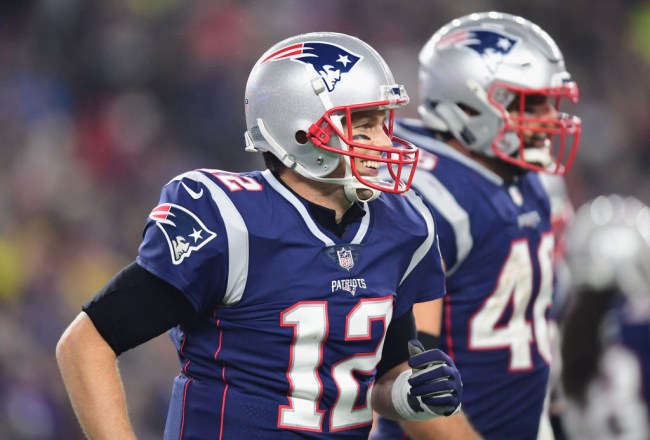 It took Tom Brady 19 seasons in the NFL to reach 1,000 yards rushing, a milestone that Brady must cherish more than any of his five Super Bowls. The 41-year-old achieved the watershed moment on a 5-yard scramble in the first quarter of Sunday’s 24-10 home win over the Minnesota Vikings.

For those who watched the game in its entirety, you may have noticed something a bit odd on the very last play. Brady took a knee to run out the clock, but instead of backing away from potential incoming defenders, he stepped forward to take the knee, thus not losing a yard and keeping his 1,000 yard rushing achievement. He even pointed to the ref to make sure he saw it.

At the end of the game, Tom Brady took a knee forward instead of backwards to make sure he keeps the 1,000 yard mark of rushing.

He even pointed to the ref to make sure he sees it 😂pic.twitter.com/foqXYUDgEg

Droves of anti-Patriot football fans took to the comments to call Brady things like “douchebag.”

As a Patriots fan, I choose to believe that there’s a stipulation in Brady’s contract that states that if he reached 1,000 yards by the 12th game of the season, his controversial fitness guru, Alex Guerrero, could dress in full pads for a game.