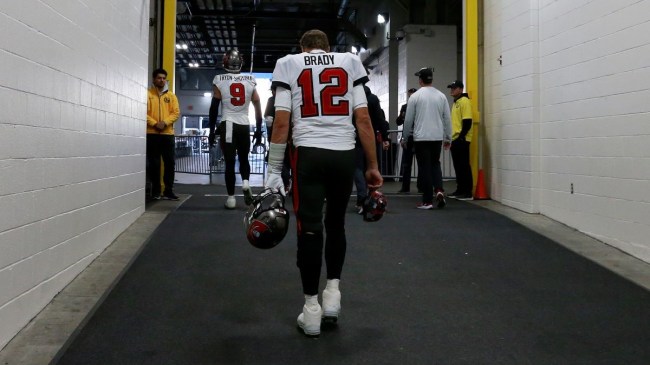 It’s never a good day when you lose an NFL game as a massive favorite. It’s an even worse day when you’re the Tampa Bay Buccaneers, with Tom Brady at quarterback, and you lose to a Pittsburgh Steelers team that resembled a MASH unit.

Brady and the Buccaneers went into Pittsburgh as a 9.5-point favorite against the Steelers. Pittsburgh entered the contest with a 1-4 record and without three of its four starting defensive backs. To make matters worst, rookie starting QB Kenny Pickett left the game in the third quarter after suffering a concussion.

But it didn’t matter.

Brady struggled throughout the contest. He finished just 25-of-40 for 243 yards and a touchdown as Tampa Bay lost to the lowly Steelers, 20-18. The performance clearly didn’t sit well with the seven-time Super Bowl-winning quarterback and he absolutely laid into his offensive line with an F-bomb-laden tirade on the sideline.

Fans across the league criticized Brady for the tantrum, particularly after his preseason stint away from the team. Former Steelers quarterback Ben Roethlisberger said Brady “didn’t look like he wanted to be out there.”

But now Brady is putting all that to rest.

Brady went on his “Let’s Go” podcast on Monday and addressed the much-talked-about incident, saying it really wasn’t all that big of a deal.

“I do think that it’s a bad day when there are more F-bombs than touchdowns,” Brady said on his Let’s Go podcast. “They used to kind of keep from showing you in those moments. But now, it’s kind of for the world to see. That’s just the way it is.”

Brady said that everything is good between himself and his teammates on the offensive line. He said that, as the Buccaneers’ quarterback, it’s his job to try to rally the troops when adversity hits.

“I think I have a great rapport with all my teammates,” he said. “They know that the only reason why I’m doing it is to try to motivate them and to try to raise them to another level. – via CBS Sports

Tampa Bay fell to 3-3 with the loss. But given the lowly state of the NFC South, the Buccaneers remained in a tie for first place with the Atlanta Falcons.

They’ll have a good chance to get back on track next Sunday against the 1-5 Carolina Panthers.