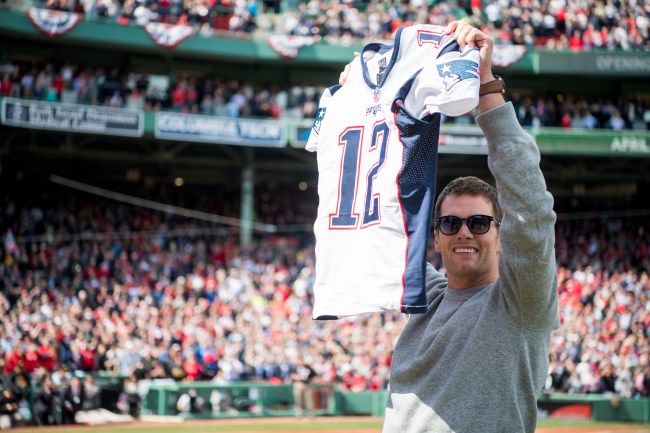 Tom Brady is the greatest Qb in NFL history — even if he doesn’t want to hear about being the GOAT — and has six Super Bowl rings to his credit. While Brady (probably) doesn’t rank which of those championships were most meaningful to him, there’s one that really stands out for the way that it all went down.

That would be Super Bowl LI.

For those forgetting, Super Bowl LI matched up the New England Patriots versus the Atlanta Falcons, and included a remarkable second half comeback by the Pats after trailing 28-3, led by Tom Brady and his never-say-die attitude. Even if this were the only Super Bowl Brady had won in his career, there’s a good chance people would have still wanted to put him in the Hall of Fame; that’s how epic the game ended up being.

While the drama on the field was tense, there was even more off the gridiron after the Pats’ victory, as Tom Brady’s game-worn jersey was stolen from his locker without anyone knowing. For a guy who has a camera in his face at all times — especially after a championship win — it’s hard to believe someone could just creep up and yank his most famous jersey from him, yet, that’s exactly what happened.

Given the investigation into the great Tom Brady jersey heist — which ended with authorities recovering the famous (and expensive) piece of memorabilia in Mexico — FOX Sports is releasing a documentary about the whole saga, with the 54-minute film debuting the day before Super Bowl LIV. Here’s a look at the teaser about the film, which looks interesting AF.

Aptly-named The Great Brady Heist, the documentary has a 30 for 30 feel to it, with cameras going behind-the-scenes, and releasing never-before-seen interviews from Tom Brady. The documentary even includes an interview with the man who stole the jersey, Martin Mauricio Ortega, and dives deep into the investigation to recover the jersey.

Here are further details about The Great Brady Heist, courtesy of FOX Sports:

“As the game’s broadcaster, FOX Sports played a role in so many elements of this story, so it made sense for us, with the help of NFL Films and Religion of Sports, to take a closer look and see it through,” said Charlie Dixon, Executive Vice President of Content, FOX Sports. “The Great Brady Heist is the fulfillment of a three-year journey that’s captivated us from the beginning, and the film’s Super Bowl weekend debut makes it particularly special.”

“Just when you think you’ve seen it all in the sports world, a story like this comes around,” said Ross Ketover, Chief Executive, NFL Films. “Anyone who thinks they know what happened that day will discover more jaw-dropping details than they could have imagined. ‘The Great Brady Heist’ is one of the most unique projects NFL Films has ever produced. We couldn’t be more pleased to partner with FOX and Religion of Sports on such an engaging film.”

Sports always carry the best, most unscripted drama, and, thanks to this Tom Brady jersey heist from Super Bowl LI, we were able to see that firsthand. With the soon-to-be-released documentary, fans can relive the details and see how everything unraveled to recover the one-of-a-kind piece of memorabilia. The short film airs on Saturday, Feb. 1 at 7:00 PM ET on FOX.