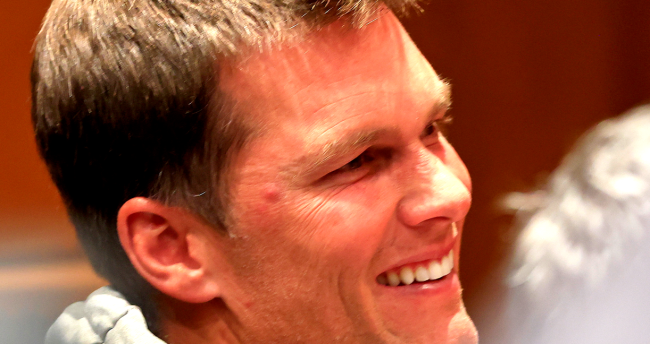 Tom Brady may be coming back for another season with the Tampa Bay Buccaneers after his 40 day retirement, but don’t think he isn’t still hard at work on his post-NFL career options.

According to reports by the Wall Street Journal and Financial Times, Brady already has himself a new gig – one that many people aren’t exactly thrilled about.

Who is Declan Kelly? Declan Kelly is the public relations professional who resigned as chief executive of consulting firm he co-founded, Teneo, in 2021 after sexual harassment allegations.

The Wall Street Journal reported last July that Kelly “had gotten drunk and behaved inappropriately with people at a celebrity-filled charity event near Los Angeles in early May, his spokesman said, after news reports said Mr. Kelly had touched women without consent.”

And now Tom Brady’s face is right there on Kelly’s new company website, listed as a partner and on the firm’s Leadership Team.

Check out Tom Brady’s bio on the site…

Tom Brady is a Partner at Consello. He is a proven leader, whose achievements are attained by mastering the skills of leadership, strategy, performance, and teamwork. In addition, Tom’s deep knowledge of health and wellness is put into practice daily as he continues to set new records and push beyond limits. He has the focus, discipline and drive that creates and sustains excellence.

As a seven-time Super Bowl champion, Tom is one of the most accomplished athletes of all time. With 18 Division Titles and 10 Super Bowl appearances, Tom’s accolades both on and off the field have inspired a generation of young athletes to pursue their greatest potential. Tom has won 6 Super Bowl titles with the New England Patriots, as well as 1 with the Tampa Bay Buccaneers – more than any other quarterback in NFL history.

Tom’s off-the-field ventures include Autograph, a web3 brand pioneering a new era of digital experiences and a platform that brings together the most iconic brands and biggest names in sports, entertainment, fashion, and pop culture to create unique digital collectibles; his namesake next generation apparel brand BRADY; TB12, a health and wellness brand that aims to share his proven TB12 method and holistic systematic approach to wellness; and 199 Productions, a global multi-platform production company developing original, premium content spanning documentary, feature film, television, and digital formats.

Tom holds a B.A. from the University of Michigan.

Consello also has an advisory board that includes former NBA star Pau Gasol and Mindy Grossman, the former CEO of WW International Inc. (aka Weight Watchers).

Reactions by many to this news about Tom Brady joining up with Declan Kelly at Consello were not exactly positive.

Don't care haven't seen him do anything for anyone except himself

Why on earth would Brady hire a PR firm that creates bad press for him just via the association? Baffling choice. https://t.co/Vm6Iyvi5Zq

Yikes. Still blows my mind he associated himself with Alex Guerrero after the fake cancer treatment scandal.

Well between Declan Kelly, Alex Guerrero, and Donald Trump Brady has always been incredibly diligent in who he associates with

Tom Brady has proven time and time again to be a shitbag person, but he throw ball good! https://t.co/6Mgamq9eMz