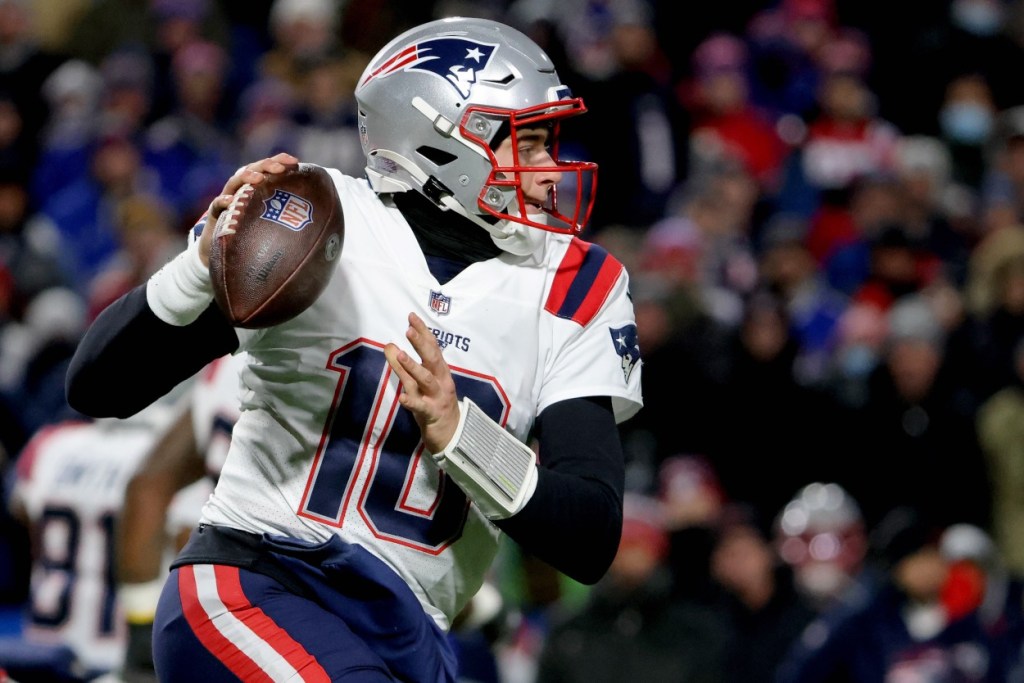 Patriots head coach Bill Belichick all but sealed up the NFL’s Coach of the Year award by winning a game where Pats QB Mac Jones only threw 3 passes, a franchise low for the Patriots and the fewest by any NFL team in a win in 40 years.

I didn’t catch this tweet from former Patriots player Rich Hornberger until I saw it shared on Instagram via ‘kookoftheday’, an account dedicated to making jokes about kooks and people who take surfing way too seriously. But Mac Jones was wearing an actual SCUBA wetsuit underneath his uniform on Monday Night Football against the Bills to stay warm in the blizzard conditions.

Here’s the timeline throughout the years (in reverse order).

Part of the reason why it’s important to have a veteran in the room. pic.twitter.com/xNq5Ryx7bi

Here is Tom Brady wearing a SCUBA suit while playing for the Patriots on January 14, 2018 in a game against the Tennessee Titans, a 35-14 win (in Foxborough):

Tom Brady, once again wearing the scuba suit under his jersey, takes the field for warmups. pic.twitter.com/kLygXe7HRv

Tom Brady will be wearing this under his uniform. The QB told our @MikeReiss he wore it all week at practice and will today #patriots #jets pic.twitter.com/liRVgyhmN5

A post shared by the Kook of the Day (@kookoftheday)

This might be something that was common knowledge for diehard Patriots fans but I polled all of the NFL writers here at BroBible and nobody knew about Tom Brady’s history of wearing SCUBA suits in NFL games.

So for anyone out there reading this who is like “duh, we knew this” the reality is most NFL fans had no idea. Here’s what was going on with the fan discussion on Twitter.

I didn’t know that!

It’s weird to think that Canadians had any access at all to SCUBA wetsuits back in the day before Amazon and online shopping.

Tom got the idea from Doug Flutie. It’s an old Canadian cheat code

And now you passed this on to everyone. And you didn't even need to be in the locker room

There are ways to alleviate the heat; in any case, I'll take heat over cold when getting hit any day

TB12 got the scuba suit idea from Adam Vinatieri I believe.

With all of these conflicting reports on where Tom Brady originally learned this trick from I can’t help but wonder if it’s something that’s been going on for generations and it just never gets talked about.