Tom Brady Says He’s Still Not Over His Super Bowl Loss To The Eagles, Reveals The Perspective He’s Gained From It 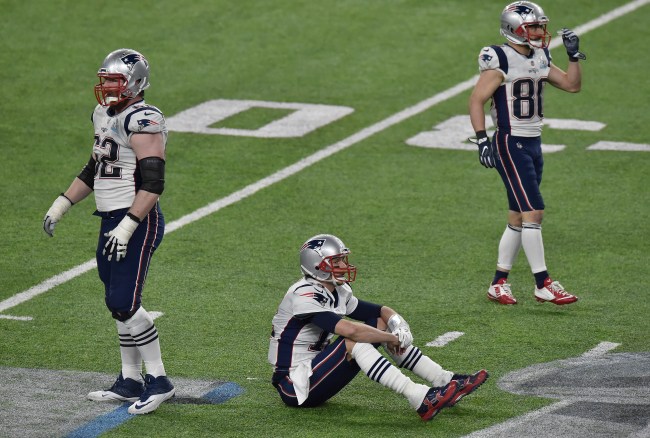 It has been 645 days since Nick Foles and the Eagles Philly Special’ed their way to a Super Bowl LII victory, their very first in team history.

Tom Brady, a man who can’t even fit his rings on one hand, has still not come to terms with the 41-33 loss, despite passing for a Super Bowl record 505 yards and having more Super Bowl wins than I have friends.

Brady’s Patriots will take on the Eagles Sunday in the first regular season game since that fateful day two seasons ago and you bet your bottom dollar that the Patriots QB still harbors resentment.

On his weekly appearance on WEEI’s The Greg Hill Show, Brady was asked how long it took to get over the loss. It is still a work in progress.

Question: How long did it take you to get over that Super Bowl loss to the Eagles?

Tom Brady: "You assume I'm over it. Come on, now! That's a lot of mental scar tissue from that year. That was a tough game."

“In a lot of ways we learned from that year and we came back stronger the next year. We won the Super Bowl in ’18. I think everything is a matter of perspective and when you play in that game and you play great teams, you’re not going to win them all. This is not the Harlem Globetrotters vs. the Washington Generals. This is all about tough competition against the best teams.

Keep in mind, just weeks after the loss, Brady’s own father described his son as nearly catatonic after the game and doesn’t Tom as ever coming to grips with any of his Super Bowl losses, saying, “He will never get over the Giants losses, and I don’t think he’ll ever get over this Eagles loss either.”

Brady has been sitting for two weeks with the sour taste of a loss to the Ravens into a bye week and now he has the opportunity to go on the road and demoralize the people of Philly who are starting to feel themselves after winning two straight and dreaming of making the playoffs and constantly reminding him of this:

After Tom Brady tried to be funny on Twitter, Eagles fans bombarded the Patriots QB with reminders of his Super Bowl LII drop:https://t.co/AqiPeK0YBH pic.twitter.com/Ha23Rttqv6

“They deserved it that year, and now a couple years later we get a chance to play the organization again. We’ve had a lot changes, they’ve had a lot of changes. It’s totally different circumstances. Huge game for us. Big game for them. The better team is going to win.”

“Hopefully everyone got a chance to decompress a little bit mentally, physically and now we’ve got to get ready for a great week of preparation and then get ready to go in the there and play our best game of the season on the road, in a really tough environment. It should be a great Sunday afternoon for football.”