Tom Brady Tried So Hard To Troll Ohio State, But He Failed Miserably 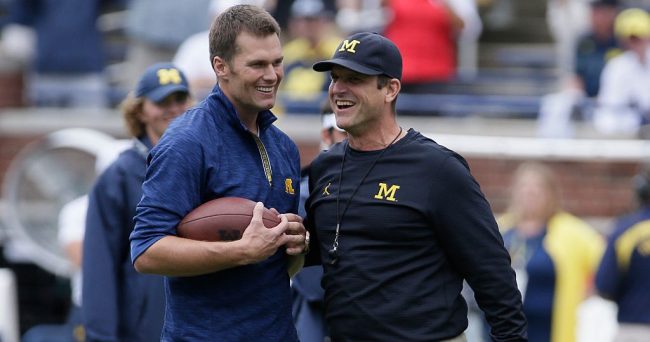 Somehow, Tom Brady has never faced an Ohio State quarterback in the NFL. That will change this weekend.

Justin Fields, the No. 11 overall pick in this year’s NFL Draft, will be the first Buckeyes quarterback to start across from Brady when the Bears travel to Tampa Bay on Sunday. Brady, of course, is a Michigan alum.

When TB12 was asked about about his first career start against an Ohio State quarterback on Thursday, he decided to talk some smack against his college rivals:

Tom Brady will face Justin Fields, the first Ohio State QB to start against the former Michigan star. His response is worth the time. pic.twitter.com/N4O5Emd3h4

However, his jab doesn’t carry much water and is actually a huge fail when you look at recent history. He said:

Brady began his college career with the Wolverines in 1996. Since then, neither team has had any quarterbacks find resounding success in the NFL.

What does it mean?

All of this goes to say that Brady’s trash talk is a total flop. The 44-year-old tried to bag on Ohio State quarterbacks’ lack of success in the NFL, suggesting that quite a a few Michigan quarterbacks remain in the pros.

Meanwhile, the only two quarterbacks remaining in the NFL from the Wolverines are Brady and Henne. That is one more quarterback in the NFL than those from Michigan— and that one is Chad Henne, who has gone 18-36 in his career.

Sure, Brian Griese got a ring in his day, but he won that Super Bowl before Brady had even graduated college. After him, and outside of Henne and Brady, Michigan quarterbacks have not had success on the next level.

So while Brady’s remarks were intended as a fun troll attempt toward his college rival, it was a complete flop.