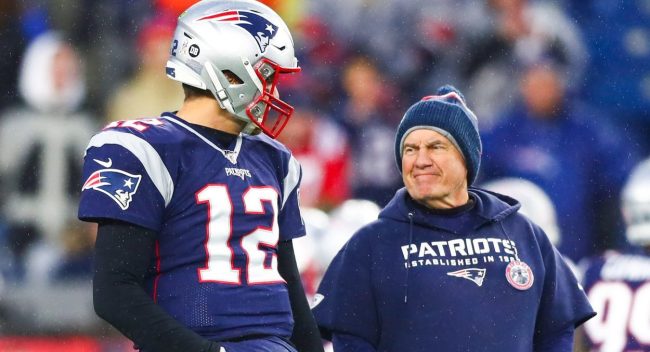 In one of the more surprising offseason splits, Tom Brady left the New England Patriots after spending two decades with the organization.

It seemed that tempers boiled over in the relationship between the quarterback and his head coach, Bill Belichick, throughout contract negotiations. For those that might not remember, Brady was adamant on signing a deal that would allow him to retire a Patriot. Belichick and the New England front office would only offer a one-year contract.

And so, Brady took his talents to Tampa Bay, where he was able to land a Super Bowl title in his first season with the Bucs. The Patriots, meanwhile, haven’t sniffed a championship since the departure, though they do seem to have their passer of the future in Mac Jones.

While the disagreement between Brady and Belichick stole headlines during that 2020 offseason, that may not have been the only domino that caused the quarterback to split.

One NFL insider is suggesting that a move from the 2019 NFL Draft had an impact, as well, and that Brady would’ve considered staying had the Patriots gone in a different direction with their first-round selection.

NFL insider Dov Kleiman hinted that New England’s selection of N’Keal Harry was the last straw for Brady. Harry was picked by the Patriots with the 32nd overall choice, but he’s failed to live up to that billing.

If the #Patriots picked DK Metcalf, AJ Brown, Terry McLaurin, Deebo Samuel, and such over N'Keal Harry when they were still on the board, it's very possible the best QB in history never chooses to leave their team.

According to Kleiman, this continued a pattern for head coach Bill Belichick and his failures to provide Brady with weapons in the NFL Draft. That 2019 season saw the Patriots drop the second-most passes in the NFL while having guys struggle to get open on a consistent basis.

Samuel, Brown, and Metcalf have all gone on to become NFL stars. The Patriots, meanwhile, are still searching for answers at wideout. Hopefully the inability to find talent in the draft doesn’t continue to stunt New England’s offensive growth moving forward.