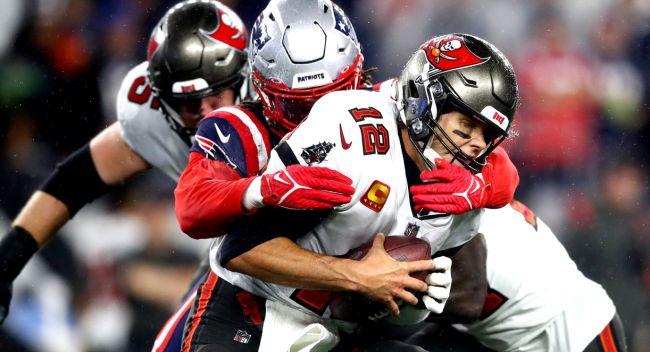 Tom Brady has been playing, and being successful, for so many years that he is the owner of numerous NFL records.

One record Tom Brady has never come close to sniffing is the record for most yards rushing by a quarterback. In 22-plus seasons, Brady has rushed for 1,118 yards. (His “quest” to become a 1,000 yard rusher got the NFL Films treatment back in 2018.)

Unfortunately, Brady’s 1,118 yards rushing pales in comparison to the 3,495 yards he has lost due to being sacked a whopping 553 times – a subject that was brought up to him on this week’s episode of the Let’s Go! podcast.

“You’re on the verge of another NFL record,” co-host Jim Gray informed Brady. “You’re two sacks away from having the all time number, overtaking Brett Favre.”

“Explain,” Brady replied with a chuckle.

“Well, if you go down two more times you’ll have been taken to the ground more than any quarterback in the history of the National Football League,” Gray answered. “Now you’ve played much longer than those others on the list, including Favre and Peyton Manning and so forth. But you may as well put that in the bag with all of the other records that you have.”

“That’s pretty good,” Brady responded. “And I think the thing about that, I’d like to actually thank my complete lack of agility and speed for allowing me to knock on the door of this very esteemed NFL record. So, I have some other cool ones. This one I’m probably not as excited about.

“Like we always say, oh, you know, some things get better with age. I think the feeling you get when you’re sacked is not one of those

““After as many times as I’ve been sacked at my age, I’d prefer to, let’s just pass this record pretty quickly and hope I don’t add too many more to that growing list over the second part of this season. Some would say, Jim, that I’m just trying to diversify the portfolio, so we’ll leave it at that.”

NFL fans will get to see if he breaks the record Thursday night when the 3-4 Buccaneers take on the 4-3 Ravens.