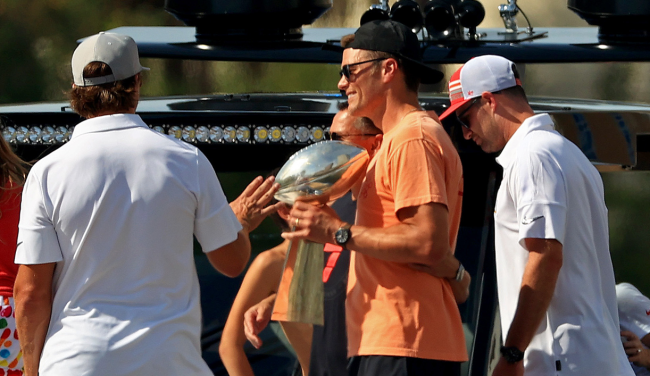 It was the seventh time that Brady had won a Super Bowl, a record, and made him the only quarterback to win a Super Bowl in three separate decades.

So, when the season was over, and the Bucs had knocked off the Kansas City Chiefs 31–9 for the title, TB12 had earned himself a little bit of celebrating.

And celebrate he did.

During the Buccaneers’ Super Bowl 55 victory parade, which was held on the water, Touchdown Tommy was feeling no pain and, thanks to an assist from backup quarterback Ryan Griffin, barely able to keep himself vertical by the time it was over.

At one point, Brady infamously threw the Vince Lombardi Trophy over the Hillsborough River to his tight end Cameron Brate for a completion no one expected.

On Friday, the Tampa Bay Buccaneers’ Twitter account posted a blurry photo asking fans if they could guess the moment in the team’s history.

Can you guess this moment in Bucs history? ⬇️ pic.twitter.com/NxdUvAtfYR

One person who certainly could was the man who made that moment famous: Tom Brady.

“This was my actual field of vision when I hucked that thing,” Brady tweeted back in response to the photo.

As we have seen time and time again, dude is not only the GOAT on the football field, he is also vying for GOAT status when it comes to athletes on social media.

STOP BEING SO LIKEABLE!!