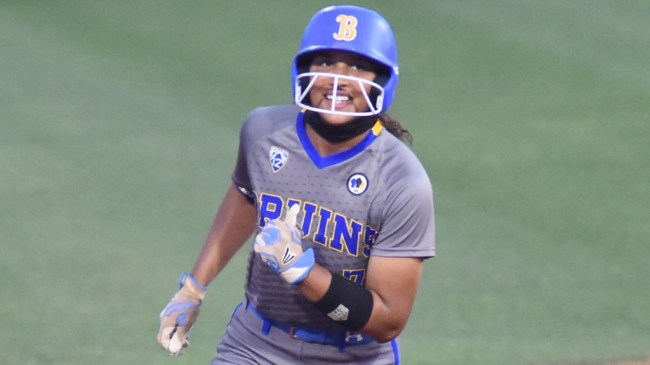 Maya Brady is more than just Tom Brady’s niece. She’s a home run-smashing, RBI-knocking, certified slugger for No. 2 UCLA softball. Through 37 games during the 2021 season, the redshirt freshman utility fielder is batting .343 with 30 RBIs and 11 dingers. Two of those moonshots came on Thursday night and her uncle Tom had some fun chirping Rob Gronkowski on Twitter.

Hey @RobGronkowski next time you need a ball dropped 600 ft out of the air in Tucson just ask Maya https://t.co/qh8sydpCHT

Brady and the Bruins traveled to Tucson, Ariz. for a three-game series with the Wildcats and couldn’t stop hitting bombs in game one. Arizona is third in the Pac-12, so it’s not like it is a team that is significantly inferior, but it got ugly quick.

With two outs in the top of the first inning, Rachel Garcia went deep to kick things off. She also happens to be one of the best pitchers in the country and threw a 5-innings (mercy rule) shutout in the circle. Then the next batter followed up the homer with one of her own, bringing Brady to the plate with a 2-0 lead.

Not wanting to be left out of the party, Brady hit one a billion miles an hour to dead center. See ya.

Brady now joins the double-digit homer club with her 10th.

She got back up in the top of the second and flew out to end the inning. It was already a 5-0 ballgame so it didn’t matter. UCLA added two more runs in the third before Brady stepped up to the plate in the top of the fourth. Turning on a 3-1 pitch, she hit a ball into orbit for her 11th home run of the year.

Brady with her first-career, two-homer game. Her 11th home run of the season.

The second home run marked Brady’s first-career two home run game and put UCLA into mercy rule territory. If a team leads by eight or more after five innings, the game is called and declared a win.

The Bruins held on to the 8-0 lead and took down Gronkowski’s alma mater. Brady was the star of the game and her uncle decided to let his tight end know just how bad his niece did the Wildcats.