Maya Brady, Tom Brady’s Niece, Is The Best Athlete In The Family And Hits Moonshots For UCLA Softball 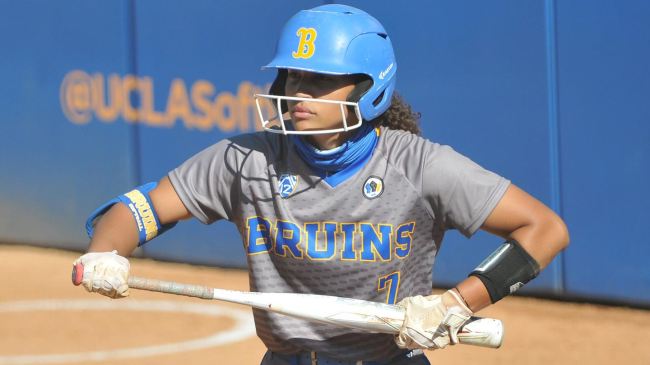 Maya Brady is the future of UCLA softball and she’s only a redshirt freshman. The 5-foot-10, California-native was named the Softball American Freshman Player of the Year after the pandemic-shortened 2020 season and is hitting .333 with who home runs and 11 RBIs through 11 games in 2021. Her hot start to her collegiate career comes as no surprise for the No. 2 overall recruit in the 2019 class, and her athleticism is rooted in a familiar last name.

Maya, born Maya Ann Brady-Timmons, is the daughter of Brian Timmons and Maureen Brady— an All-American pitcher who finished her four-year career at Fresno State with a record of 80-31 in 748.2 innings and anchored the Bulldogs in back-to-back Women’s College World Series appearances. More notably, her uncle is the greatest quarterback of all-time. Tom Brady, who has seven Super Bowl rings, still believes that his sister is the best athlete that the family ever had, but his niece is quickly coming for that title.

As a senior at Oaks Christian High School in Thousand Oaks, Calif., Brady hit .558 and played middle infield. Growing up in the area, UCLA has been her dream school since she was 10 years old and committed as a freshman. She didn’t even open up her recruitment to other programs, it was Bruin or bust.

When she arrived on campus last season, Brady immediately made an impact for the 13-time National Champions and perennial powerhouse. In the 26 games that were played prior to the season shutdown, she hit .356, slugged .699, hit seven home runs and batted in 28 runs. She hits bombs.

Maya Brady is such a blast to watch 🚀 pic.twitter.com/BS6n7tdayw

And she knows how to announce her presence. In her first collegiate at-bat, Brady knocked in an RBI against the 2019 SEC Champions and third-place finisher Alabama Crimson Tide.

First at-bat for Maya Brady is a run-scoring base hit that was scorched off of third base. 🔥@UCLASoftball leads Alabama early. pic.twitter.com/Rp1jnPyfAM

Of her seven dingers in 2020, four came in her first five games.

Maya Brady is a BEAST‼️@UCLASoftball’s stud freshman sends this one out for a grand slam. 😳 pic.twitter.com/ipksc1Qu47

Maya Brady is a freshman and likes to hit home runs on Olympians. 💁‍♀️#NCAASoftball | 🎥 @UCLASoftball pic.twitter.com/0sifFrzlMY

Brady’s 2021 campaign isn’t off to quite as blistering of a pace, but the numbers speak for themselves— she’s legit. After mashing her first tater of the season, ‘Uncle Tommy’ (as Maya calls him) weighed in on the family rankings.

Maya Brady, the most dominant athlete in the Brady family…by far! https://t.co/BUstHqAyjD

While Brady played primarily in the infield as a high schooler, she has been all over the diamond for the Bruins and typically starts in the outfield this season. It is an easy transition for someone with a rocket arm. Watcher put in WORK during a family game of dodgeball. And that competitive fire is evident when she gets out and has to walk out. Nobody in the Brady family settles for anything less than victory.

While Maya Brady is proud of her uncle and appreciates the advice he has given her along the way, she wants to be known for her own achievements. With four years of eligibility remaining, she is well on her way.