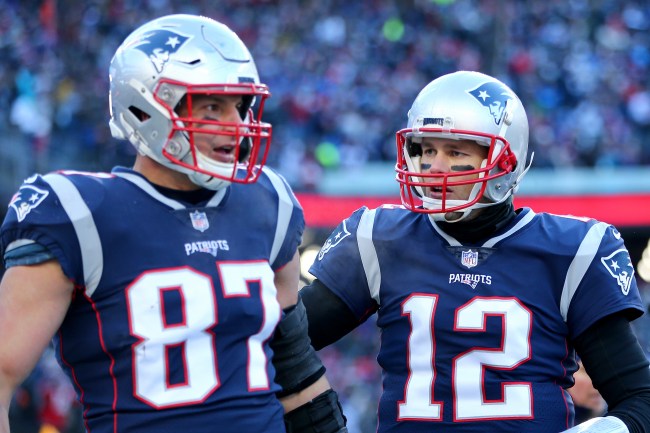 While Tom Brady has plenty of love for Rob Gronkowski he doesn’t agree with his former teammate’s opinion that the team should always be happy after wins.

On Sunday afternoon during the Fox pregame show, Gronk, who confirmed that he was staying retired, said that he didn’t miss being around Brady when he was frustrated with the team despite winning games.

Rob Gronkowski has a lot of thoughts on Tom Brady's negativity.

“You know, it’s crazy — they’re 9-1 and he’s still frustrated, too, and it’s like, ‘Yo,’ like, ‘You guys are 9-1,'” . “That’s the one part I don’t miss about being there, hands down. I’m not going to lie. I don’t miss that. You’re frustrated. They’re 9-1. They win a game last week vs. Philly. We lost to them in the Super Bowl two years ago. They should be happy. Instead, you’re sitting there Sunday night, like, ‘What did I do wrong?’ Like, no. That’s not the feeling that you should have. You should be pumped about the win, no matter (what). Yeah, you might’ve not put the offensive numbers that you put up. But you won the game and enjoy it, go out the next week and build off of it.”

Gronk on Brady "He's so frustrated. It's like, 'Yo, you guys are 9-1.' That's one part I don't miss there … . I’m not going to lie. I don’t miss that They should be happy. Instead, you’re sitting there Sunday night, like, ‘What did I do wrong?’ pic.twitter.com/dTU0mMkLr8

During a radio interview with Gregg Hill on WEEI this week, Brady responded to Gronk’s criticism about his attitude on the Fox pregame show.

“I think everyone deals with things differently and I think that was part of having a guy like Gronk in the locker room that was so great was he approached it like he does,” Brady said. “He always looks at the bright spots in everything. When you have great attitudes like that, it is good to have. He was a great player for us for a long time. We have different challenges that we face and for me personally, I don’t have one emotion after every game. There’s probably five or 10. The moment you catch me is how I will feel at a particular time and sometimes it takes time to digest things and deal with things. Hopefully we can process those by the time the preparation for the next week starts.”

Brady went on to defend his frustrations with the team despite winning.

"You want to see a great performance and when it's less than that, I don't know what I should feel other than what's authentic to me." – Tom Brady

I have a job to do,” “I think my job, it’s very important to me. I want us to do as best we possibly can each week, like I always have. Everybody puts a lot into it and you want to see a great performance. When it’s less than that I don’t know what I should feel other than what is authentic to me and what is authentic to my own personal feelings and beliefs about how we should be performing and what we need to do in order to do better.”

“I have 20 years of experience, so I feel like I have some knowledge,””I don’t have all the answers, but I have been around long enough to know what it looks like. I think our guys are trying. We have good attitudes and we work hard. We have a very good team. I think our team will improve as we on offense improve.”

It’s hard to argue against Brady’s approach when he has six Super Bowl rings and is considered the GOAT by many.