Tom Brady Makes True On His Promise To Send Superfan Joe Mixon A Signed Jersey, Even Added A Personal Note 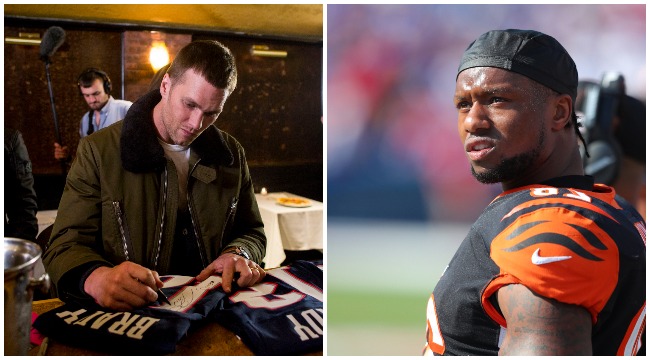 Christmas shopping for Joe Mixon will be a cinch this year seeing as the Bengals running back has just received everything he’s ever wanted.

You may remember Mixon fangirling hard for Brady after the Bengals 34-13 loss Sunday, revealing on Twitter that he was elated just to shake the legendary quarterback’s hand, but was “too scared to ask” Brady for his jersey.

Bruh.. I still can’t believe I shook @TomBrady hand today and had a lil conversation with him😂 I ain’t gone lie I wanted to ask for his jersey but was too scared to ask🤦🏽‍♂️😂

Brady responded and promised to send a jersey Mixon’s way, but it sounds like the mere fact that Brady even responded would have sufficed.

Bro @TomBrady just made my Year😂this is crazy! Man I’m so blessed to be playing this game! Just know one is on the way for ya brotha💯

Mr. Brady made true on his promise and in the time it takes to say ‘Two Day Shipping,’ an authentic signed Tom Brady jersey appeared at Mixon’s locker.

Man I say this in the most humbled way I’m so Blessed to be playing this game. Super Thankful for the https://t.co/eD9G0mRPE1. @TomBrady Best Christmas gift ever. Later Today I’m headed down to the boys and girls club today to give the gift forward today with my own jersey’s. pic.twitter.com/EpBtPSMigq

Context for the ‘Bay Area’s Best’ comment: Mixon was born in San Francisco and attended high school in nearby Oakley where he blossomed into a five-star recruit and the top-ranked running back in the nation by the Rivals.com.

Brady, of course, was born in San Mateo and played high school ball in Jupiter where he began his football career as the backup quarterback on an 0-8 junior varsity team.